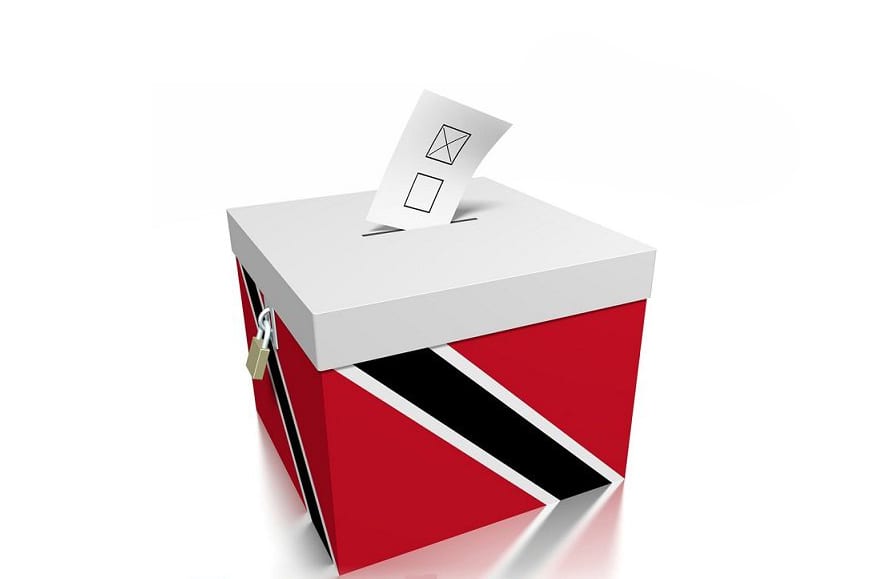 (Loop News) Today, eligible electors from all over the country will cast their vote for the next government of Trinidad and Tobago.

It has been a brisk but eventful election season, set against the backdrop of a global pandemic and more recently, a rise in COVID-19 cases on the islands.

Polls open at 6am and close at 6pm and voters should expect a slightly prolonged voting process as officials work to ensure social distancing and hand sanitisation are practiced by voters and authorities in the polling stations.

The Elections and Boundaries Commission (EBC) has been working closely with authorities from the Ministry of Health to ensure health guidelines are established for the electoral process.

According to the EBC, over 1.1 million citizens are eligible to vote in this year’s election. 146 candidates from 19 political parties, and four Independents will be contesting the 41 constituencies across Trinidad and Tobago.

Today, the incumbent People’s National Movement (PNM) will try to hold on to its 23 seats, as well as wrest more from the grip of the opposition United National Congress (UNC) and the Congress of the People (COP).

Over the last five weeks, since the announcement of the election date, political parties have had to improvise their approach to campaigning.

Walkabouts and motorcades, many conducted with flagrant disregard for legislation designed to protect the population against the threat of COVID-19, remained a cornerstone of political campaigning for both major parties.

Otherwise though, virtual town halls and rallies took the place of massive physical ones, and the internet was inundated with Zoom links and Facebook lives on an almost nightly basis.

On the UNC’s side, political leader Kamla Persad-Bissessar slammed the government’s response to COVID-19 at every turn and promised on the political platform to increase testing for the virus and to bring home nationals still outside the country’s closed borders.

The PNM also centred much of its manifesto on economic recovery and diversification – the plummeting price of oil over the last five years has been difficult to ignore.

They pledged to invest $500 million into the agricultural sector in Fiscal Year 2021-2022.

The party also dedicated special focus in its manifesto to the development of more affordable housing in different economic brackets, as well as the continuation of its private-public partnership in the housing sector.

Both parties highlighted plans for digital transformation of the economy in their manfiestos.

Today, as Trinbagonians head to the polls, all eyes will be on the marginal seats, where some successful Members of Parliament won by narrow margins in the 2015 election.

Among them is the Moruga/Tableland seat, where the PNM’s Lovell Francis won by only 533 votes in the 2015 General Election. This year, five candidates are contesting the constituency. Former Member of Parliament for Mayaro under the UNC, Winston ‘Gypsy’ Peters will be going up for the area, this time under a PNM banner, while the UNC counts on councillor for the area, Michelle Benjamin to secure the seat. Also, in the running are the Trinidad Humanity Campaign’s (THC) Larry Sanchar, Steve Alvarez of the Democratic Party of Trinidad and Independent Thomas Sotillio.

Another seat to watch is the hotly contested La Horquetta/Talparo which is currently held by the PNM’s Maxie Cuffie. Cuffie confirmed in May of 2020 that he would not be seeking reelection in the area. The PNM’s Foster Cummings hopes to retain the seat for his party against the UNC’s Deputy Political Leader Jerlean John. John made headlines earlier this week for distributing kitchen appliances in the area, which she said was ‘flood relief’ for recently affected residents.

Another marginal seat, St Augustine, will get fresh representation this year, as the sole Congress of the People (COP) Member of Parliament Prakash Ramadhar declined to go up for reelection this year. Ramadhar has held the seat since 2010. This year, five new candidates will be vying for the constituency – the PNM’s Renuka Sagramsingh-Sooklal, the UNC’s Khadijah Ameen, the COP’s Political Leader Carolyn Seepersad-Bachan, the Progressive Empowerment Party’s (PEP) Satesh Ramsaran and the THC’s Michlin Hosein-Phelps.

The Barataria/San Juan seat is another one to watch. The outgoing MP for the area, Fuad Khan of the UNC, won by just 540 votes in 2015. This year, two senators hope to become MP for the area. Saddam Hosein, a lawyer by trade, became an Opposition senator in 2017 and will be going up against the PNM’s most recently appointed senator, Jason ‘JW’ Williams, a former radio personality and entertainer. Also contesting the seat will be the PEP’s Albertha Purdeen.

In Tobago East, the incumbent Ayanna Webster-Roy of the PNM is facing a threat from the Progressive Democratic Patriots’ (PDP) Watson Duke, a divisive but popular figure in the sister isle. Also in the fray is Juliana Henry-King of One Tobago Voice.

Political analysts and polls commissioned by independent bodies estimate that the race will be a close one.

Both of the major political parties stand to lose or gain ground in the battleground constituencies, and the threat from the smaller political parties cannot be understated in those areas only a few hundred votes stand between victory and defeat.

In the end, the one major factor that will determine the outcome of this election will be voter turnout. In 2015, 66.86 per cent of the total eligible electorate turned up to vote; in 2020, it remains to be seen whether citizens will brave the possible risk of COVID-19 to stain their fingers in this election.

Loop News will be bringing you all the updates from the ground as Trinidad and Tobago heads to the polls and will bring you live coverage of the results via our election map and election live blog after 6pm today.