OilNOWLatest News and Information from the Oil and Gas sector in Guyana
More
NewsRegional
Updated: October 2, 2017 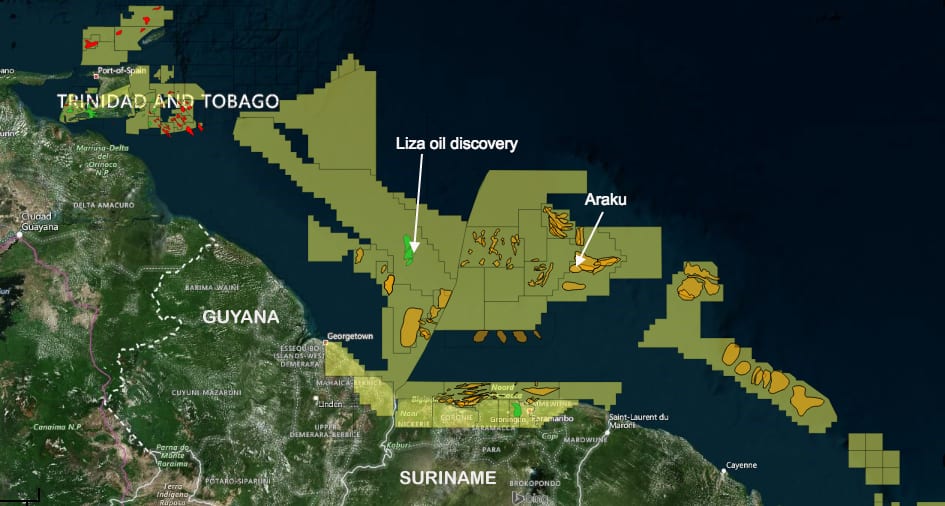 Tullow oil is hoping to strike it big offshore Suriname at the Araku oil prospect on Block 54, set to begin early this month.

The UK-based oil and gas exploration company is targeting a Jubilee look-alike play in the continental shelf directly up-dip of the Liza oil-discovery, in shallow waters.

The Araku prospect is a large structural trap which has a resource potential estimated at over 500 mmbo. It has been significantly de-risked by a 3D seismic survey carried out in 2015 which identified geophysical characteristics that are consistent with potential oil or gas effects in the target reservoirs.

“Oil seeps further up-dip of Araku support the presence of active oil migration and sharp AVO responses provide certainty of the reservoir extent on the Maastrichtian-aged primary target which is estimated by TLW to be ~5x the size of Jubilee; two further stacked targets could provide additional upside,” said Ron Huff, Founder and Managing Director at Energy Development Advisors, in a recent comment.

Huff said given that the AVO response cannot distinguish hydrocarbon phase, the accumulation could be gassy (4-5Tcf according to TLW). “We estimate ~30% chance of success. Based on a 500mmbbl oil pool, ~$40mm gross well cost and at $56/bbl Brent long-term, we carry Araku at £0.21/sh un-risked to Tullow,” he stated on his LinkedIn page.

The Noble Bob Douglas drillship has been contracted for the Araku campaign.