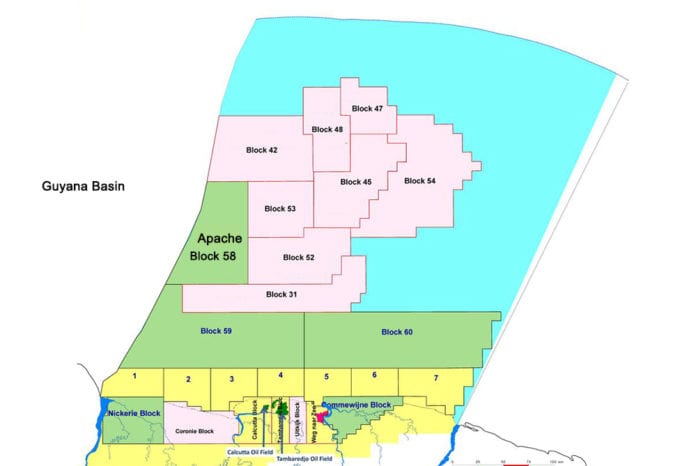 US independent Apache has spud a wildcat on Suriname’s Block 58, probing a prospect considered to be closely on-trend with one of 14 discoveries made by US oil major ExxonMobil in neighbouring Guyana.

According to an October 4 report from Upstream, Apache is using the drillship Noble Sam Croft to fulfil a one-well commitment but has options for three more wells.

Apache has yet to confirm that the well was spud, but two sources told Upstream the operator has started drilling.

Upstream said the name of the prospect has not been confirmed, but one that has been under consideration is thought to be called Maka.

The tract borders some of Stabroek Block’s most productive areas in Guyana and is said to be near Haimara, the ExxonMobil group’s south-easternmost find near the two countries’ maritime border.

In recent remarks, Apache CEO John Christmann refused to say the well, which should take 30 to 60 days to drill and is one of several more wells permitted in Suriname, would directly offset Haimara.

“When we look at the views across by kind of stitching together the 2-D and 3-D data [from Suriname] and taking into account Guyana activity going on next door, you’ll find that the geologic setting is not changing much,” Christmann said. “But it’s exploration.”

Christmann added there are seven play types and over 50 large prospects on the block from which to select targets.

Earlier this year, Kosmos was mulling the Walker prospect for 2020 drilling on Block 42, which is also adjacent to the Turbot area of southeast Stabroek in Guyana.

Trotman for Petroleum meeting in Suriname