OilNOWLatest News and Information from the Oil and Gas sector in Guyana
More
FeaturedOpinions
Updated: January 19, 2020 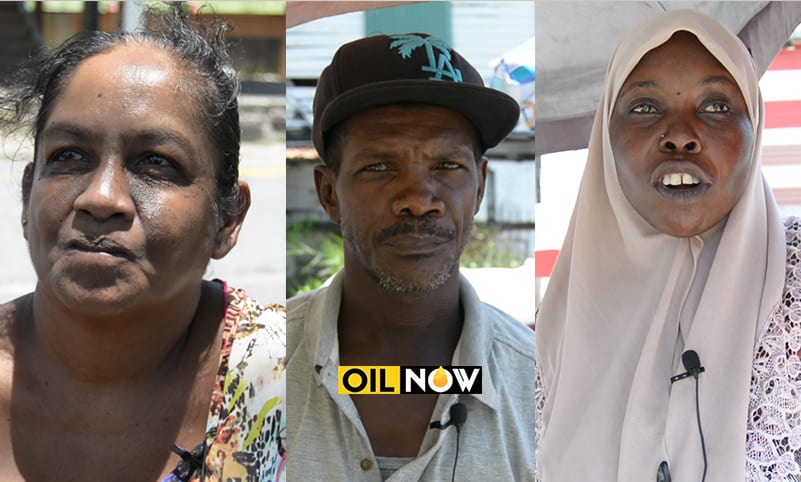 UPDATE: This report was first published on September 23, 2017. Oil production in Guyana started on December 20, 2019 at the Liza Phase 1 Development.

As preparation for oil production in Guyana continues, the view of the population regarding what the revenues – projected to be close to one million US dollars per day – should be used for is mixed. The sentiments expressed by Guyanese when asked what they would like to see change in the country ranged from free education, to more housing and better infrastructure. While some individuals were pessimistic about the country’s outlook when oil revenue begins flowing in 2020, others were hopeful.

“Guyana has 750,000 people and if you’re getting billions upon billions of barrels of oil, the revenue alone that you’re getting there, some people saying that it is too small but it is not too small when you do the calculation. If the people investing billions of US dollars to bring this thing out of the ground, you don’t have the technology then you got to abide, you understand, but not to say we will abide all the years. Sometime you will want to do things off of your own and get your own people, train people, you know what I mean, but you gotta work with the people for now. When you come down to the revenue part, that money is a lot of money which Guyana needs. Guyana is a third world county. You cannot match yourself with America, Canada and those places…they are far more developed. With we could do; every baby born open a bank account for them, because you got a lot of money…you understand me. That is all I have to say.”

“Well, what I think should be done with the revenues of the oil is to enhance the social orders of the people of Guyana. I think it should be spent on eradication of the underprivileged or the pheasant class or the poor. It should be used for the development of some of our roads, drainage and a lot to do with the educational aspect of our people and the enhancement of the education standards. Make them more aware because I have found out in Guyana that the underprivileged or the poor people; it is shocking to know many of them don’t have proper schooling. They can’t read and write and that is very bad. I mean this is the 21st century you know; this is not 1965 or 1970.”

“Well, it (oil revenue) should be distributed to all the private citizens. As you can see down here people are homeless, people are sleeping on suitcases and boxes and stuff like that so it’s no question on what you should spend it on.”

“In my opinion I think they should spend it on school children and education.”

Well, we have a lot of things we need money to spend on. We need public transportation  because the passengers; we are not normally treated nicely with the public buses we travel in. The noise (loud music) and so on, we need like public transportation for the public to come and go. We also need rehabilitation centres for drug addicts on the streets and the homeless, so they should build a place for them. They can get free medical assistance and counseling. I am from Sophia and my community needs a secondary school.”

“I think that they should look to invest in young entrepreneurs like me; help small businesses to liberate or grow to a higher level.”

“My opinion about when they start getting money from the oil; if they use it in the right manner and in the right way, the nation can benefit. They should improve the education system also. Give families a G$20,000 (US$100). If they can look after the roads and give people cheaper house lots and cheaper living standards, that would be good. They can also pay the nurses and teachers much higher salaries; increase their salary to 50% of what they are getting now and the military and police also. A lot of bad police officers are in the force and doing a lot of dirty work and we want to try to cut it out as much as we can. I think that is reasonable.”

“Some of the money should be spent on developing where we are planting; like the farming areas need more development. A lot of people need help in the country in terms of house lots. I applied for a house lot many years now and I need to get a house lot. If they could develop more land then we could get house lots. Coming back to agriculture, now we need more market for our stuff (produce) because most of our stuff, when we plant it, most of it just selling right here (in Guyana), we need export markets for our stuff.”

“Well, basically one of the biggest problems we have is unemployment of the youths; that’s one of the greatest concerns, because you see a lot of young people unemployed walking around don’t know what to do. So they are the ones that need the help. I think they should put some incentive in place so that they could get a job and housing. At least they should go back to like what the first government used to do. We have mass lands. I drove around recently and said ‘look how land is wasting all around’. Government should take these incentives and put families in houses and let them pay like how we use to do it years ago.”

“I strongly believe that the money collected from oil should be spent mainly on education. One of the main reasons why we should spend it on education is to equip our people. Why should we waste our money that we are collecting to pay foreigners to come into our country and work for us? Why not take that same money, invest it into our education system and train our young people so that they will be capable enough to manage our oil industry in Guyana. We need our own Guyanese to run our oil company, we don’t want the international people to come in, and we know in the end what’s going to happen. This is our country, it is our oil and we need to take control of it. We need to stop giving people authority over our country. Let us do what is best for our people and our nation.”

Mr. Baldeo – Tailor at Stabroek Market (opted not to be on-camera)

“I think that when oil money starts rolling in, I hope that the government – whichever government is in power – put it to good use. For example; I am living over the river, the West Coast of Demerara, and I think we need more than one bridge over the river because in the mornings we have difficulties to get over to the City where you have to work and do other business. So I think we need more than one bridge…one is not enough. Yes one is going to come on stream very soon but I think we need more than one. And most of all, we need more roads because it is also hell getting in and out of the city. We need more by-passes so that everybody will benefit from it. We don’t want when the money come in we don’t know where it is going and whose account it is going into. Whatever money must come, every Guyanese must know about the money and they must show where it is going. It must go to very important projects even in housing; open more housing schemes so that people can live and live more freely. I think little things like those – that is where the money should go.”