OilNOWLatest News and Information from the Oil and Gas sector in Guyana
More
FeaturedOpinions
Updated: February 20, 2022 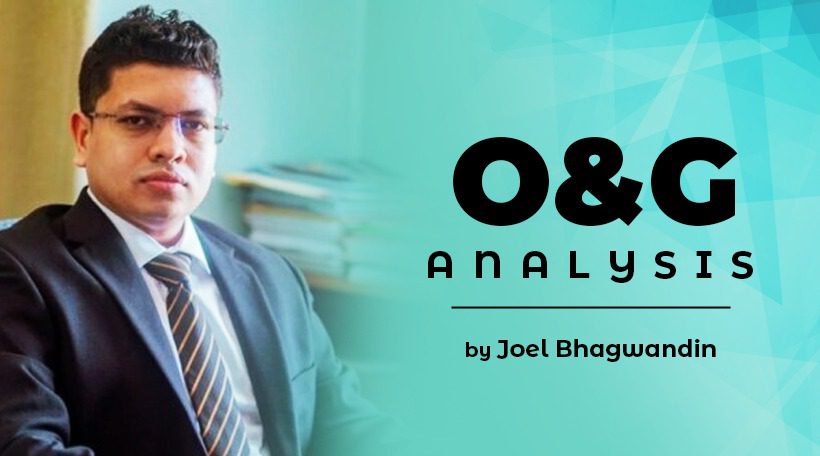 Budget 2022 is the largest budget in Guyana’s history and the first to draw down from the oil revenues sitting in the Natural Resource Fund (NRF) that was recently passed in the National Assembly.

During the budget debates, a few commentators, observers and opposition parliamentarians put forward the argument that budget 2022 will induce the Dutch disease or resource curse syndrome.

This author is contending, however, that budget 2022, by and large, lays the foundation to avoid the paradoxical resource curse and Dutch disease syndrome. Hence, this article seeks to address this notion and assess whether this is indeed the case against the backdrop of the provisions in the budget.

What is the Resource Curse?

It is intriguing how countries with oil or other natural resource wealth have failed to grow more rapidly than others without. This is the essence of a widely known academic paradox referred to as “the natural resource curse”.

Wright and Czelusta (2004), in their paper titled ‘the myth of the resource curse’, contend that the resource curse hypothesis seems anomalous, since on the surface it has no clear policy implication, but stands as a wistful prophecy. The authors argued that countries afflicted with the “original sin” of resource endowments have poor growth prospects. The danger of such supposedly neutral ruminations is, however, that in practice they may influence sectoral policies. Minerals themselves are not to blame for problems of rent-seeking and corruption. Rather, it is largely the manner in which policymakers and businesses view minerals that determines the outcome. Further, Wright and Czelusta (2004) put it nicely in concluding that “minerals are not (curses) at all in the sense of inevitability; the curse, where it exists, is self-fulfilling.” 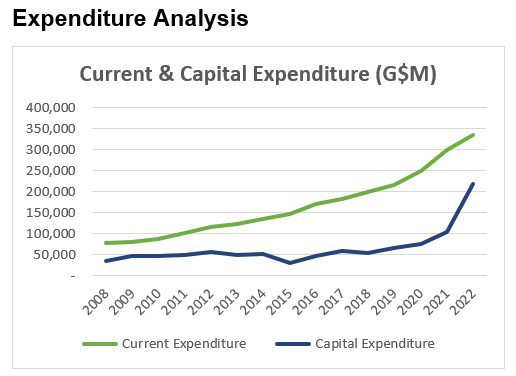 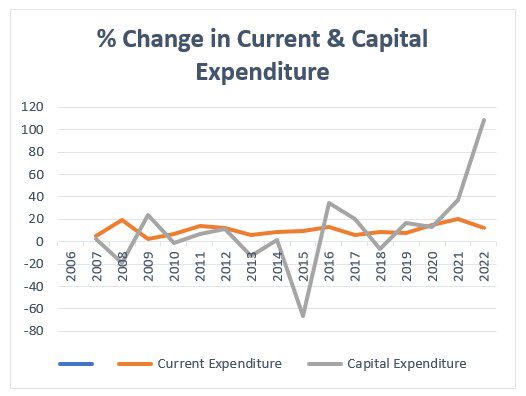 As a result, several budgets were re-engineered where sharp cuts were imposed by the Political Opposition. Due to the many deadlocks that characterized this period in Guyana’s political history, a snap election was called in 2015. 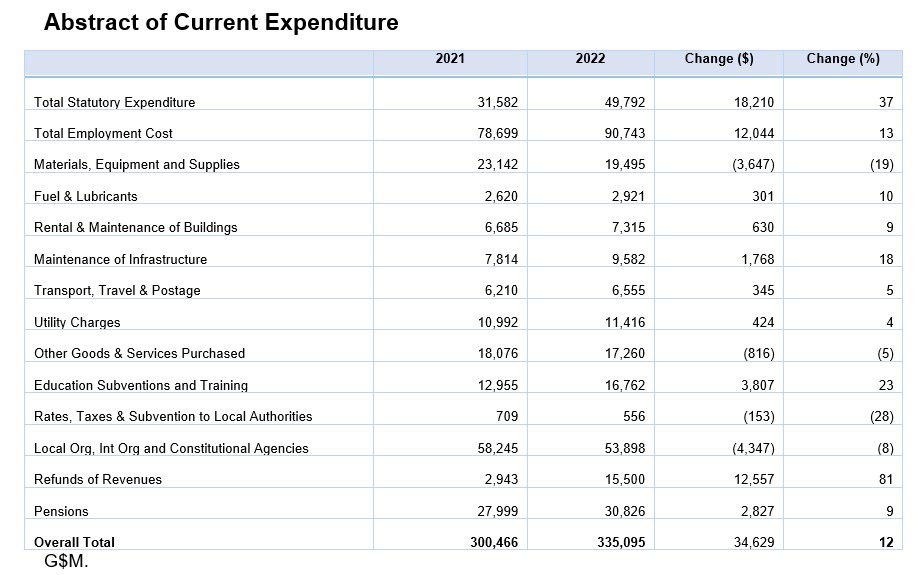 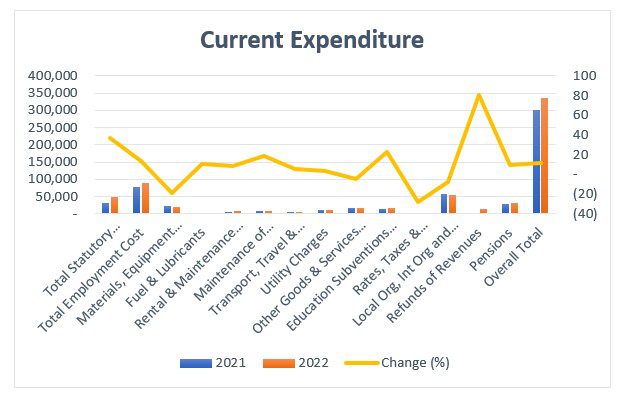 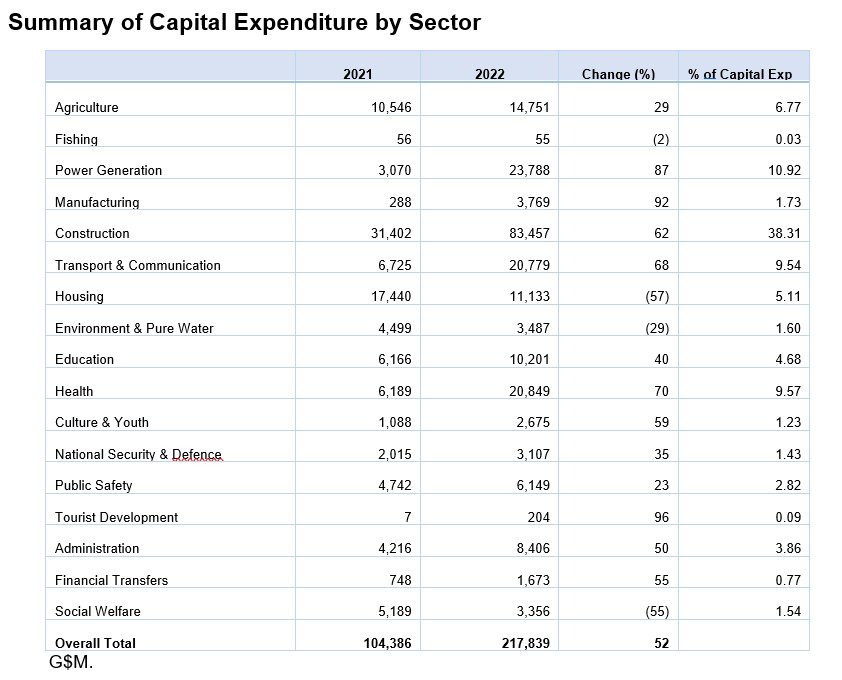 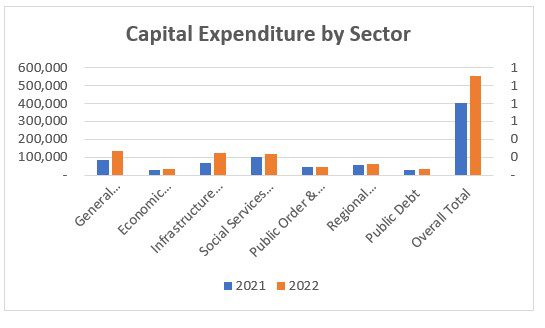 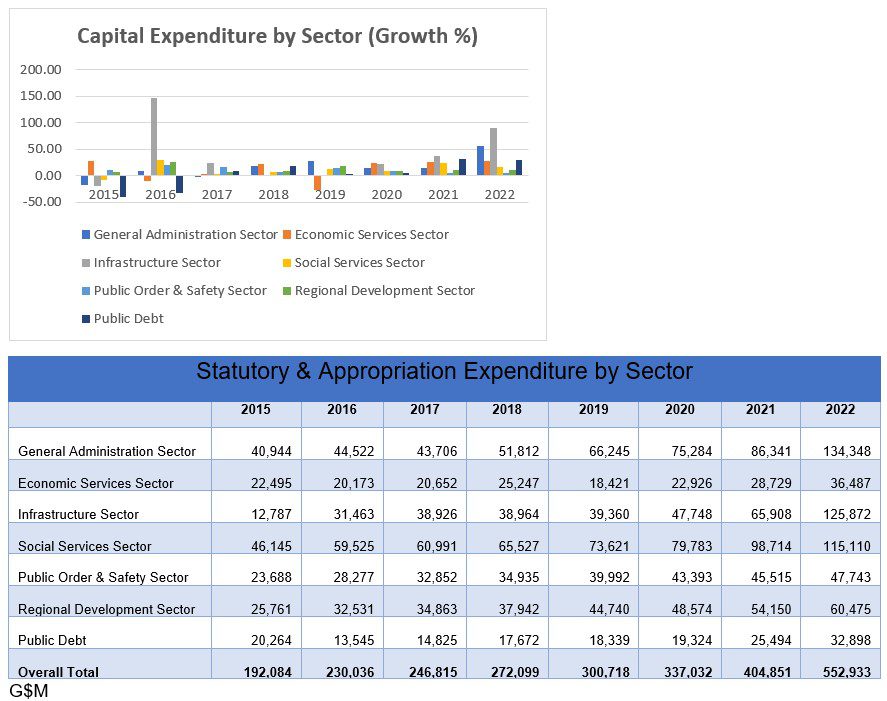 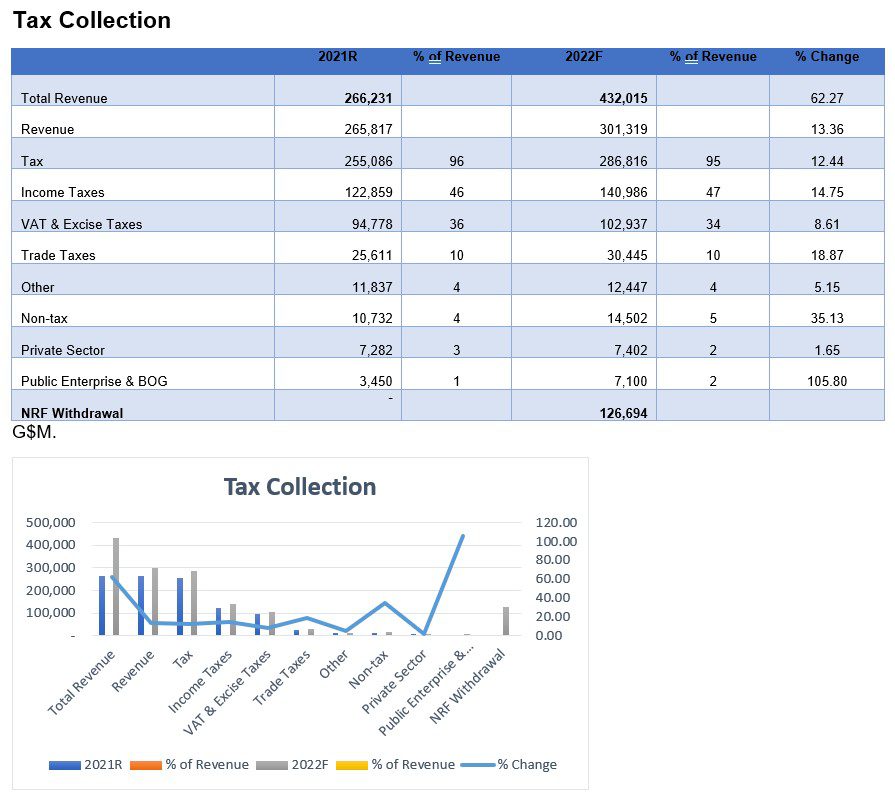 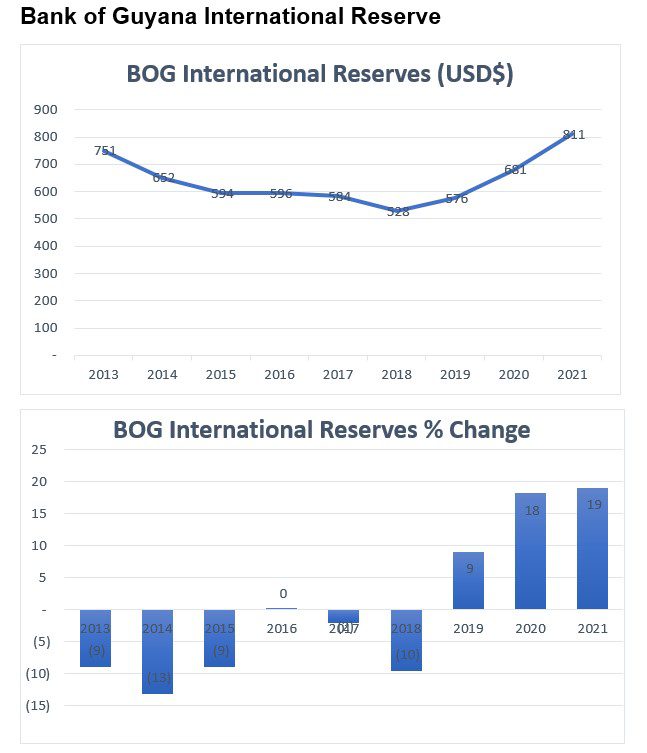 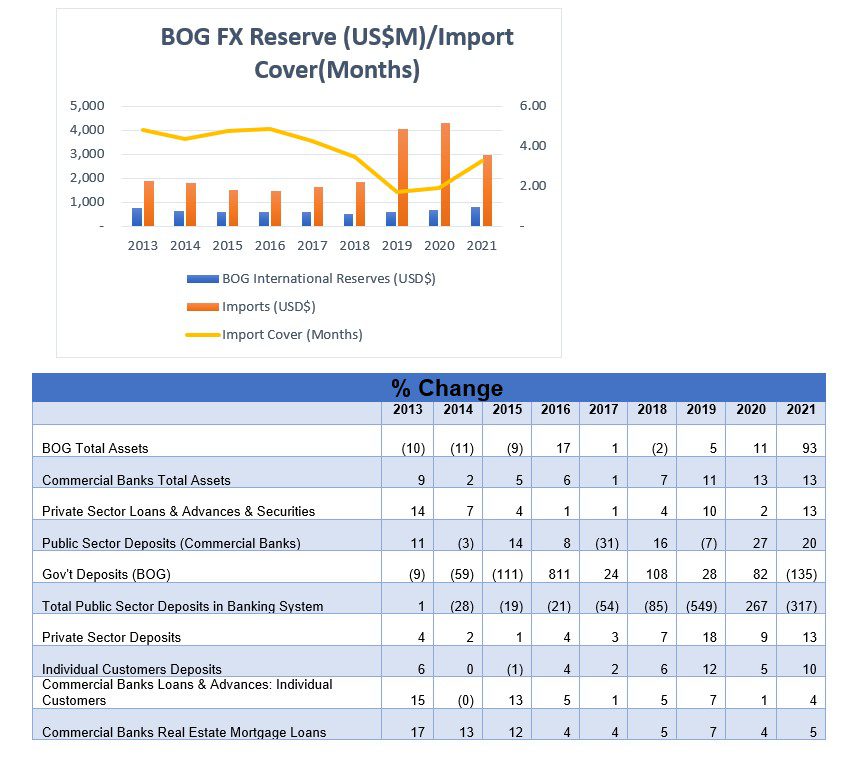 During the period 2013 – 2021, private sector loans and advances moved from $128 billion to $191 billion by the end of 2021 or by 49%. During this period, it was observed that the highest growth rate for private sector loans and advances was recorded in 2014 of 14%. In 2014, with a handicapped minority government, growth was more or less stagnated; loans and advances grew by 7% and 4% in 2014 and 2015 respectively. In 2017 and 2018 the growth rate for loans and advances recorded were a measly 1%. It should be mentioned that this period was characterized as a paradigm shift in the underlying philosophy of public policy by the Administration at that time. To this end, the public policies pursued arguably inhibited private sector growth, inter alia, increasing the cost of doing business and the implementation of a web of burdensome tax measures. In 2018 and 2019, credit to the private sector started to recover with a 4% growth in 2018 and 10% growth in 2019 – largely owing to increased activities in the oil and gas sector. This trend was short-lived in 2020 when growth fell to 2% on account of the pro-longed political impasse in that year coupled with the impact of the COVID-19 pandemic. Despite this, with a shift in the public policy philosophy once again to a more business friendly environment, credit to the private sector recorded its highest growth rate in 2021 of 13% since 2013. 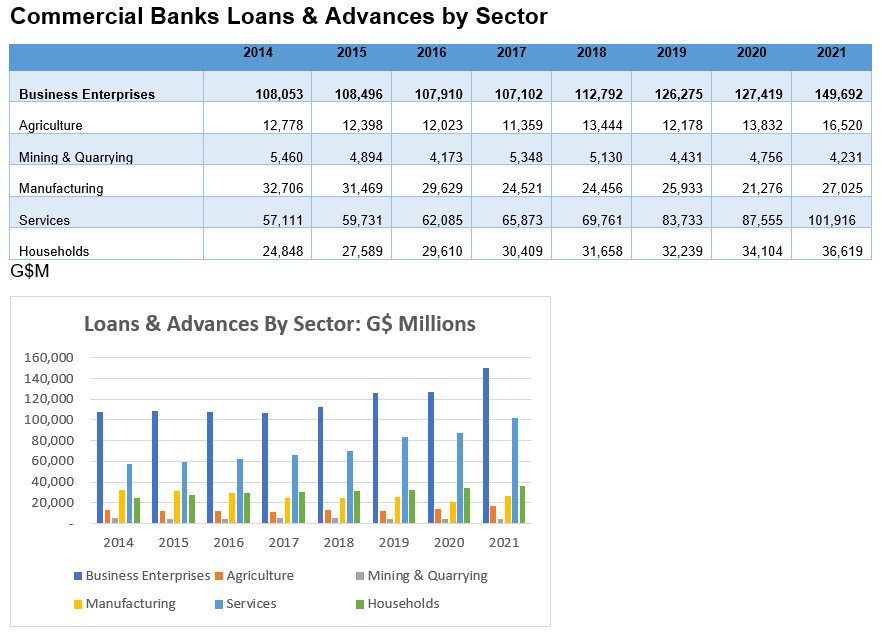 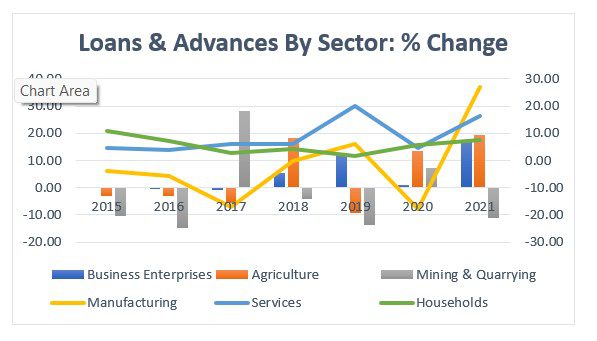 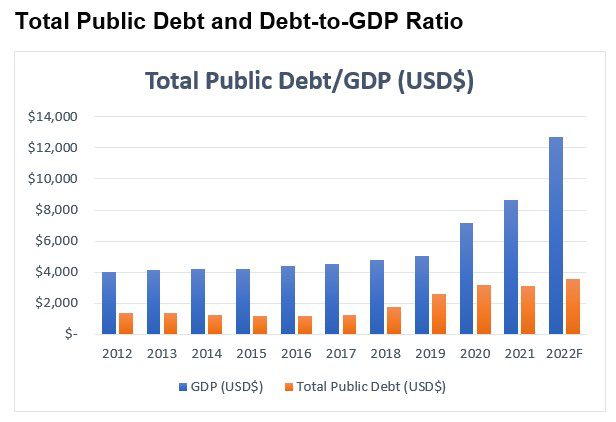 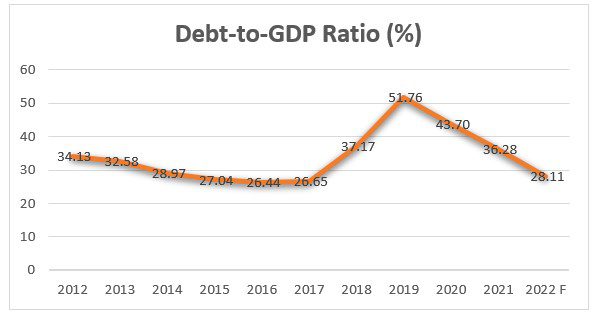 During the period 2012 – 2021 the debt-to-GDP ratio was 34% in 2012 which further decreased below 30% in 2014 and remained below 30% up to 2018. During the period 2018 – 2020, the debt-to-GDP ratio reached its highest of 37%, 52% and 43%, respectively – higher than the period between 2013 – 2017, albeit below the 60% benchmark. However, by the end of 2021 the debt-to-GDP ratio declined from its highest level of 52% in 2019 to 36%. In 2022 the debt-to-GDP ratio is forecast to reduce further from 36% to 28%. This is reflective of prudent debt management coupled with the expansion of the economy driven by the oil economy and the draw down from the NRF thereby reducing the level of borrowing. Moreover, this outturn is indicative of the fiscal space available to support the economy’s aggressive development and expansionary agenda within the framework of a sustainable development model. 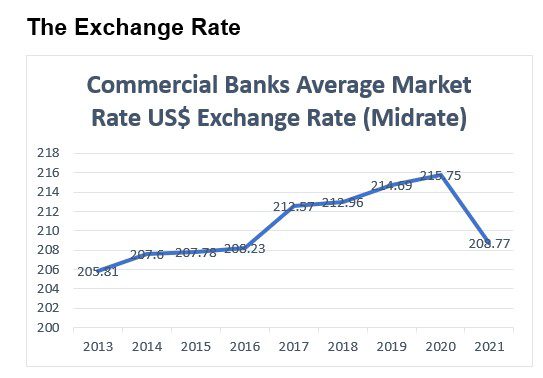 The average market rate for the USD/GYD exchange rate during the period 2013–2021 moved from $205.81 in 2013 to a high of $215.75 in 2020 representing a depreciation of about 5% of the domestic currency against the US$ over an eight years period. However, as is expected with the oil windfall, stronger exports and increased inflows of foreign exchange (FX); the domestic currency is expected to appreciate – albeit gradually. In this regard, the average market exchange rate moved from $215.75 in 2020 to $208.88 reflective of an appreciation of 3.2% of the domestic currency against the US dollar.

The economy is expected to experience buoyant growth in 2022 supported largely by the budget measures, programs and policies. To this end, the medium-term outlook is therefore positive, and real GDP growth forecast for 2022 is 47.5%.

Despite the fact that budget 2022 is the largest in history, representing almost two times the country’s pre-oil budgets, the debt-to-GDP ratio is projected to be relatively low in 2022 – below 30%, which is among the lowest in the region.

The measures contained in the budget are adequate in response to inflationary pressures, and improving the competitiveness of businesses. Also, notable improvements in the performance of the non-oil traditional sectors have been observed as a result of the policies and interventions implemented through budgets 2020 and 2021.

Overall, budget 2022 sets the foundation for Guyana’s economic transformation. In this regard, several major transformational projects are slated to commence in 2022, namely the Amaila Falls Hydro project, the gas-to-energy project and these coupled with the massive investments in public infrastructure including housing, roads and bridges.

Further, it is important to highlight that the budget contains substantial allocations towards economic diversification, and improving the non-oil economic sectors. This is critical to avoid the paradoxical resource curse and / or Dutch disease. Moreover, 40% of the total budget are allocated towards capital projects – that is, to finance a number of major infrastructure development projects.

Therefore, the government must be commended for budget 2022 which is designed to set a strong foundation for the economic diversification of the economy and to mitigate the risks of the resource curse.

The principal author, Joel Bhagwandin is a Financial Analyst who has been providing insights and analyses on economic and finance issues for the past 5+ years. He is the holder of a master’s degree in banking & finance, and he is [currently] undertaking four professional certifications in Corporate Finance through the Corporate Finance Institute (i.e., the FMVA, CBCA, CMSA & BIDA professional designations). The views, thoughts and opinions expressed in this article belong solely to the author, and not necessarily to the author’s employer, organization, committee, or other group or individual. The author can be contacted at [email protected].