OilNOWLatest News and Information from the Oil and Gas sector in Guyana
More
FeaturedNews
Updated: April 14, 2021 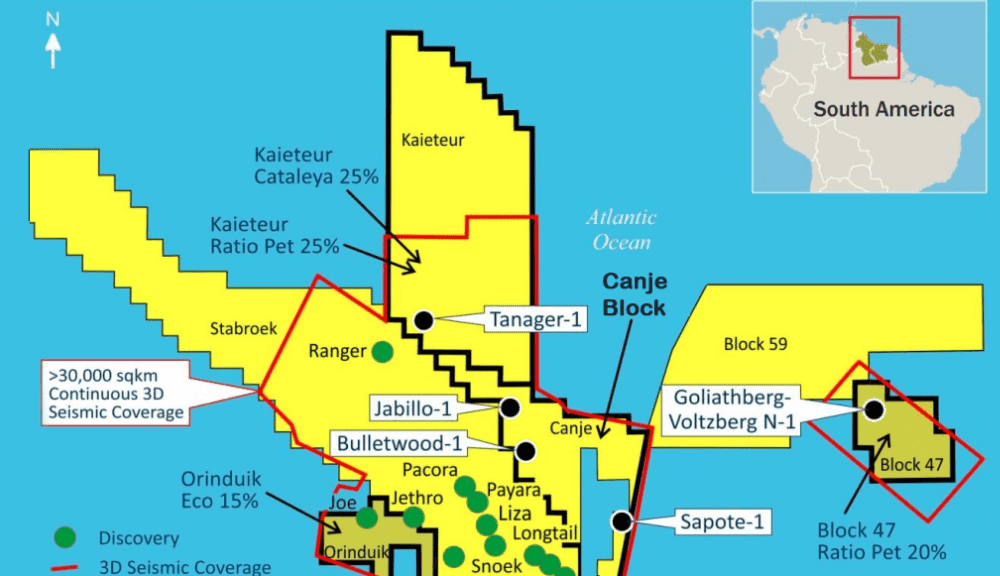 The Stena Carron initiated drilling operations at the Jabillo-1 well site at the Canje Block on March 14 as part of a three-well campaign planned this year on the acreage that is adjacent to the prolific Stabroek block where over 9 billion barrels of oil equivalent have been found. One company with interest in the Canje block believes it also has the potential to be prolific and estimates billion-barrel volumes for the Jabillo-1 well now being targeted.

Jabillo-1 is the second of three wells being targeted at Canje this year. “…It is an estimated 1 billion barrels exploration opportunity,” Westmount Energy Ltd. said in a recent update. The company has an indirect interest in the Canje block via a 7.7% shareholding in JHI Associates which in turn owns a 17.5% stake in the exploration project.

Drilling operations at Jabillo-1 is expected to resume around mid to late May, following the drilling of the Koebi-1 at the Stabroek Block. ExxonMobil, operator at both the Canje and Stabroek blocks, had embarked on a back-to-back exploration campaign in March, spudding both the Jabillo-1 and Koebi-1 prospects. This followed the Bulletwood-1 well which encountered quality reservoirs but non-commercial hydrocarbons. The well was safely drilled in 2,846 meters (9,337 ft) of water by the Stena Carron drillship to its planned target depth of 6,690 meters (21,949 ft).

Later this year, the Stena DrillMax will drill the Sapote-1 well in the eastern portion of the Canje Block.

“Drilling activity in the Guyana-Suriname basin continues to accelerate driven by the industry’s focus on ‘advantaged barrels’ as a result of the unique combination of prospect sizes, reservoir quality, low carbon intensity and low breakeven metrics (US$25 to US$35 per barrel), available offshore Guyana,” Westmount said.