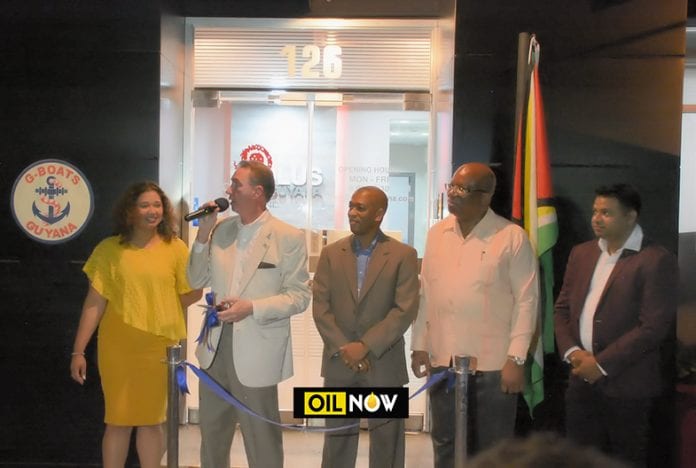 Edison Chouest entered Guyana in January 2016 with three vessels and has now increased its fleet to ten, servicing the offshore oil and gas exploration and development activities, under contract from US oil major ExxonMobil Affiliate Esso Exploration and Production Guyana Limited.

Speaking at the launch of G-Boats (Guyana Boats), located in the capital city of Georgetown, Daniel W. LaFont, Edison Chouest Business Development Manager said the company has approximately 68 Guyanese working on its vessels and expects this number to grow in coming months.

LaFont told those gathered that Louisiana, where Edison Chouest is based, share several similarities with Guyana and was transformed with the emergence of the oil and gas industry. “Oil and gas changed Louisiana and it changed it for the better,” he said, pointing out that it brought great opportunities, and this is expected for the new South American hotspot where ExxonMobil has so far discovered more than 4 billion barrels of recoverable oil.

Dr. Mark Bynoe, Head of the Department of Energy, which has oversight of the petroleum sector in Guyana, said the opening of Chouest’s office signals an increase in investor confidence and is an indication of the increasing opportunities that are becoming available with the emergence of the oil and gas industry.

“While first oil is projected in the first quarter of 2020, the sector is already showing great strides in the form of shore bases being constructed, contracts being signed, capacities being built, standards being lifted, and jobs being created,” he stated.

Dr. Bynoe said that for many Guyanese who have gained employment so far in the industry, this means an improvement in living standards and quality of life. “Moreover, their skills are being built making them significantly more marketable from when they commenced working. Guyana is on the precipice of take-off and we are happy to be part of this journey and to be setting the pillars for the transformation that is to come,” he stated.

In brief remarks, Deodat Indar, President of the Georgetown Chamber of Commerce and Industry (GCCI), said the number of Guyanese workers employed on Edison Chouest vessels operating in the country is commendable. “I believe the number is 50 percent plus, in terms of the ratio of Guyanese to foreign workers and that is testament to the spirit of local content and job provision,” he said.