OilNOWLatest News and Information from the Oil and Gas sector in Guyana
More
FeaturedNews
Updated: April 13, 2022 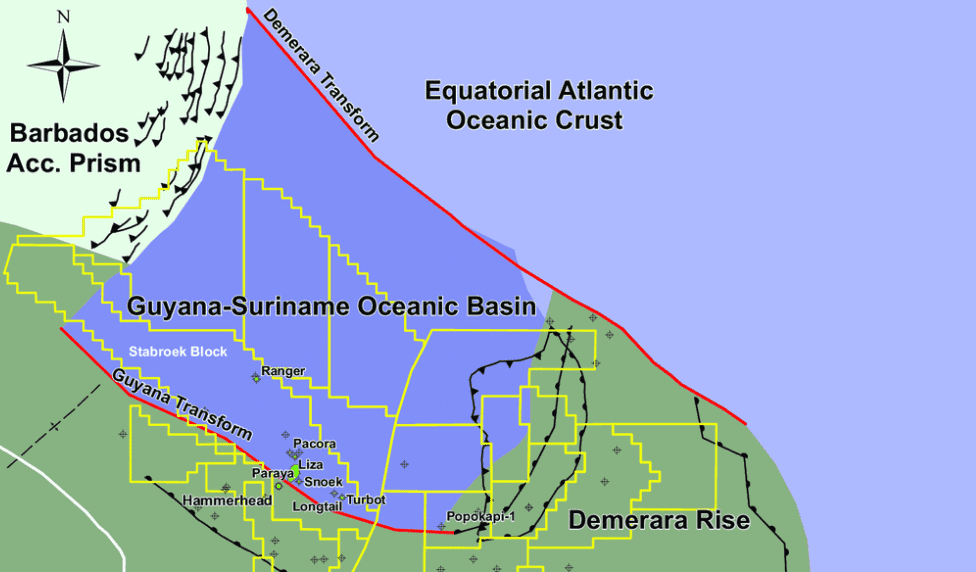 High-impact exploration in deepwater plays is reserved to major oil players – like ExxonMobil, TotalEnergies, BP, Royal Dutch Shell – and a few leading National Oil Companies (NOCs). The reason, according to UK-based consultancy group Wood Mackenzie, is because only these companies have the appetite and capabilities to drill and develop oil and gas fields in the deepwater where most of the new giant resource reserves are to be found.

And nowhere is this more evident than off the north coast off South America where record discoveries are being made in the Guyana-Suriname basin, which experts say hold over 20 billion barrels of oil equivalent resources (boe). Already, an ExxonMobil-led consortium has found over 10 billion boe at the Stabroek Block offshore Guyana and multiple discoveries at Suriname’s Block 58 show that the basin’s potential continues to grow.

WoodMac says frontier play-opening and play-extension wells are a lot more expensive to drill; the sizes of the discoveries often bring great economies of scale, deliver by far the most value and is exactly what the world needs if it is to fill an energy gap that may arise should Russia and Europe cut each other off.

In a recent analysis, the UK-based consultancy group said high-impact strategies have been vindicated by “an impressive harvest of giant discoveries”, such as those being made in Guyana.

Exploration was yielding exciting discoveries before the global hike in energy prices because of the war raging in Ukraine but WoodMac’s Dr. Andrew Latham, Vice President of Research believes that improved performance is positioning exploration to “play a role in sourcing alternatives” to Russian exports of oil and gas – not just helping to revamp its credibility as a value proposition.

“Our downside scenario projects Russian oil production to be 2 million b/d lower in 2030 than our pre-crisis forecasts, while Europe is looking to cease imports of Russian gas completely,” WoodMac outlined.

It was high-impact exploration that accounted for almost all the value created in 2021, WoodMac pointed out; seven giant discoveries were made in a variety of basins, plays and countries – in Russia, Azerbaijan by BP, in Cote d’Ivoire by Eni, in Mexico by Pemex, in Turkey by the Turkish Petroleum Corporation and ExxonMobil’s discoveries in Guyana.

Quantifying the improved performance, WoodMac highlighted that the 12 billion boe of resource discovered in 2021 – spilt evenly between oil and gas – did not make for “a standout year”. But spend was low; 75 percent below the 2014 peak and 25 percent below 2019’s.

“Adjusting for reserve creep, last year’s resource discovered will be close to the five-year average. Over half of it (55 percent) already looks commercial, creating value of US$15 billion and returns of 16 percent (at a US$70/bbl long-term oil price)…more will be commercialised in time,” the consultancy group stated.

And with Namibia discoveries, it has the potential to follow in Guyana’s footsteps.

According to WoodMac’s analysis, there should be no substantive changes to core upstream strategies that evolved before the crisis. However, it does anticipate a small group of IOCs and NOCs “that have kept the faith in exploration” to be emboldened by recent successes and the unexpected twist to events the war in Ukraine has brought.

“More capital may come exploration’s way, and more of it might be targeted at gas,” WoodMac said.