OilNOWLatest News and Information from the Oil and Gas sector in Guyana
More
FeaturedNews
Updated: October 18, 2022

Guyana’s Central Bank disclosed on Monday that 65% of the US$607 million that was approved by the National Assembly to support the 2022 budget was transferred to the Consolidated Fund. The remainder – some US$207 million – is expected to be withdrawn in the final quarter. 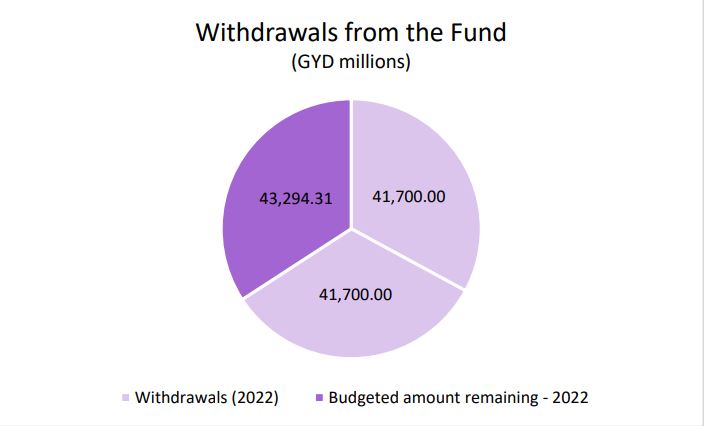 Hence, a total of GY$83.4 billion (US$400 million) has been transferred from the Fund, thereby amounting to 65.83% of the budgeted outflows for the year.

Furthermore, the operational manager said the Fund recorded a profit of GY$995.75 million (US$4.78 million) in the third quarter solely due to interest earned on deposits. This resulted in a return of 0.513% for the quarter compared with 0.177% in the previous quarter. The Fund also earned an annualised return of 0.275% since its inception.

During this quarter as well, Guyana received revenue for four lifts of 1-million-barrel (approximate) oil cargoes as its share of profit oil, taking the number received for 2022 to seven.

It is expected that revenue from an additional six oil cargoes will be obtained this year resulting in an annual total of thirteen.

As of September 30, 2022, Guyana received revenue for sixteen one-million-barrel lifts since the inception of the Fund.

Based on the formula used to calculate the ceiling on annual withdrawals from the Fund, almost US$1 billion could be available for support to the country’s 2023 budget.