OilNOWLatest News and Information from the Oil and Gas sector in Guyana
More
FeaturedNews
Updated: July 25, 2021 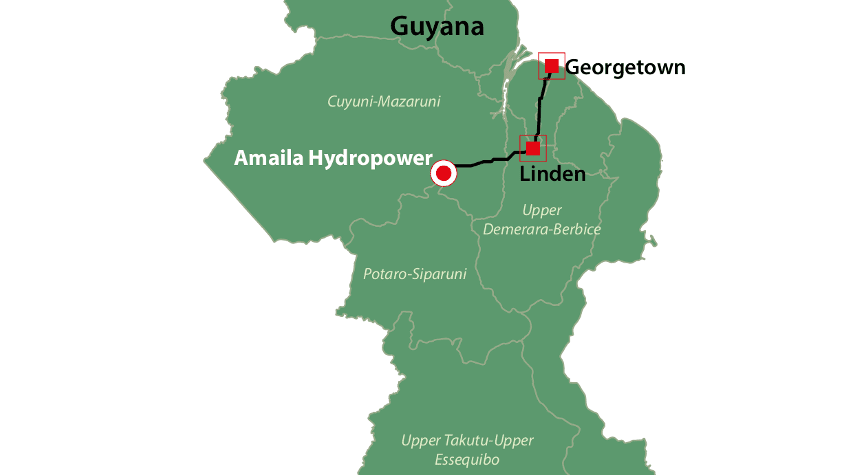 In addition to moving ahead with plans for a gas-to-energy project which is expected to start up in 2024, the Guyana government announced on Friday that it is seeking a developer for a largescale hydropower facility at the remote Amaila waterfall.

The People’s Progressive Party Civic (PPP/C) government had proposed the project more than a decade ago. But from 2011 onwards, the combined political opposition had prevented it from moving forward. Then, when the A Partnership for National Unity (APNU) and Alliance for Change (AFC) parties coalesced for the 2015 elections, the PPP/C government was unseated.

Now back in office, the PPP/C-led administration intends to revive the 165 MW Amaila Falls Hydropower Project (AFHP). Construction is expected to start on the plant in 2022, with project completion and commissioning by the end of 2025. The government has invited submissions of proposals for the project. The scope of work includes a 165 MW hydro dam and plant at the waterfall in Region 8, a 270 km transmission line to Georgetown, electrical substations in Georgetown and Linden, and a 23 sq. km storage reservoir.

The project would also require upgrades and completion of roads and bridges to the site (85 km new: 122 km existing).

The first option for project development – Build-Own-Operate-Transfer (BOOT) – would see the developer handling all the construction costs up to the commission date, then controlling the project for a 20-year BOOT period. At the end, the developer would hand over the project to the Government at no cost.

The second option is called Design-Build-Finance. Similar to BOOT, the developer would finance the project. However, in this case, the government, once satisfied about the completion of the project, would take over at the commissioning date and commence financing repayment according to contract terms.

Potential developers are expected to submit proposals for each option for the government to choose from.

The 165 MW AFHP would be commissioned just a year after the 250 MW Gas-to-Energy project that the government is facilitating with ExxonMobil’s local affiliate, Esso Exploration and Production Guyana Limited (EEPGL).

According to a government-commissioned 2018 report by the Colombian consultancy firm Brugman SAS, Guyana’s main grid, the Demerara Berbice Interconnected System (DBIS), had an installed generating capacity of 172.2 MW as of December 2017. But the demand is growing rapidly as the country develops. The government said its power supplier, Guyana Power and Light (GPL), sees the total capacity required in 2025 moving to 465 MW.