OilNOWLatest News and Information from the Oil and Gas sector in Guyana
More
FeaturedNews
Updated: September 28, 2022

Guyana’s oil sector has been on an upward trajectory since production began in 2019 from ExxonMobil’s Liza Phase 1 development. And now, the International Monetary Fund (IMF) sees the country’s oil sector gross domestic product (GPD) growing over 100% this year, and by around 30% on average per year from 2023 through 2026. 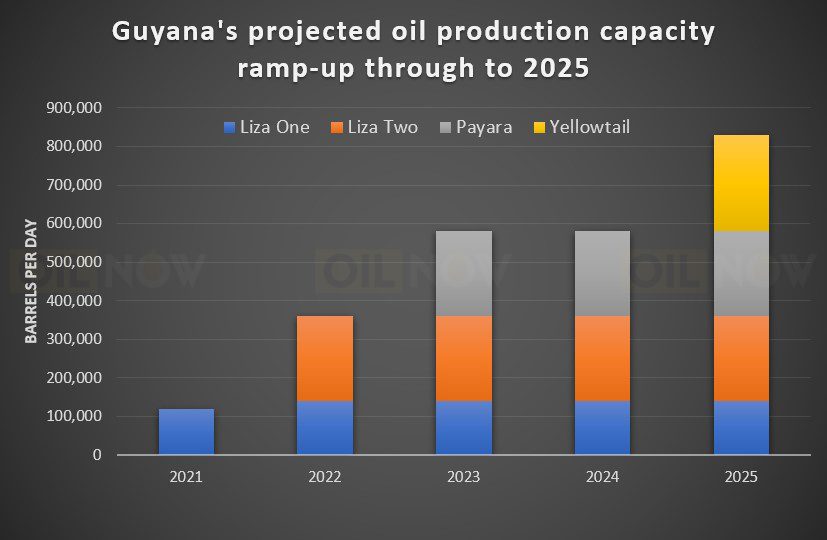 Guyana’s Ministry of Finance in its 2022 mid-year report said oil production is expected to surpass one million barrels per day by 2029 but based on the pace of project approvals, this is likely to come even sooner. Estimates from government and the IMF appear conservative, when compared to the Stabroek Block group’s plans. Exxon expects production to hit 1.2 million barrels per day (bpd) by 2027 and may even debottleneck vessels to increase oil production capacity.

When its third development – Payara – comes on stream by 2023, IMF projects an average of US$83.5 per barrel will be gained from barrels across the three developments. By 2024, IMF projects oil prices to fall, reaching US$77.8 per barrel and then down again to US$74.1 per barrel in 2025.

By then, Exxon would have added the Payara and Yellowtail developments bringing the country’s production capacity to 830,000 barrels per day.

The Yellowtail development, among approved projects, will utilise Guyana’s biggest oil floater – ‘ONE GUYANA’ – being designed by SBM Offshore to produce 250,000 barrels of oil per day, with an associated gas treatment capacity of 450 million cubic feet per day and water injection capacity of 300,000 barrels per day. The floater will be spread moored in water depth of about 1,800 meters and will be able to store around two million barrels of crude oil.

Facebook
Twitter
Pinterest
WhatsApp
Linkedin
Email
Telegram
Previous articleDemand for shore base capacity in Guyana to skyrocket with 10 FPSOs in play
Next articleKeppel bags US$2.8 billion deal to build new FPSO for Petrobras