OilNOWLatest News and Information from the Oil and Gas sector in Guyana
More
ExplorationFeaturedNews
Updated: January 18, 2022

To date, there have been more than 20 major discoveries in the ExxonMobil-operated Stabroek Block offshore Guyana. The largest of them by depth is Lau Lau-1 which was announced on January 5 by the American multinational.

The Lau Lau-1 well encountered approximately 315 feet (96 meters) of high-quality hydrocarbon-bearing sandstone reservoirs. To put this into context, the discovery in height, is equivalent to three (Georgetown) Marriott Hotels (105.88 ft) stacked on top of each other. It is also more than two times the height of the St. George’s Cathedral (143 ft), one of the world’s tallest freestanding wooden buildings.

Also ranking among the top five largest discoveries in the Stabroek Block by depth are: Tilapia, Liza, Yellowtail, and Longtail.

Liza is known to be the largest by volume so far, having encountered 800 million to 1.4 billion barrels of oil equivalent resources.

The Tilapia discovery was announced in February 2019 and is ExxonMobil’s 11th oil discovery in the Stabroek Block. It was drilled in a new reservoir, encountering approximately 305 feet (93 meters) of high-quality oil-bearing sandstone reservoir and was drilled to a depth of 18,786 feet (5,726 meters) in 5,850 feet (1,783 meters) of water.

Yellowtail was announced in April 2019 and is ExxonMobil’s 13th oil discovery in the Stabroek Block. It was drilled in a new reservoir, encountering approximately 292 feet (89 meters) of high-quality oil-bearing sandstone reservoir and was drilled to a depth of 18,445 feet (5,622 meters) in 6,046 feet (1,843 meters) of water.

Longtail discovery was announced in June 2018. Longtail is ExxonMobil’s eighth oil discovery in the Stabroek Block. It was drilled in a new reservoir, encountering approximately 256 feet (78 meters) of high-quality, oil-bearing sandstone reservoir. The well was safely drilled to 18,057 feet (5,504 meters) depth in 6,365 feet (1,940 meters) of water.

At the time of announcing the Cataback-1 discovery on October 7, 2021, Exxon increased the discovered recoverable resource for the Stabroek Block to approximately 10 billion oil-equivalent barrels. The more recent discoveries will further increase these rapidly growing resources. 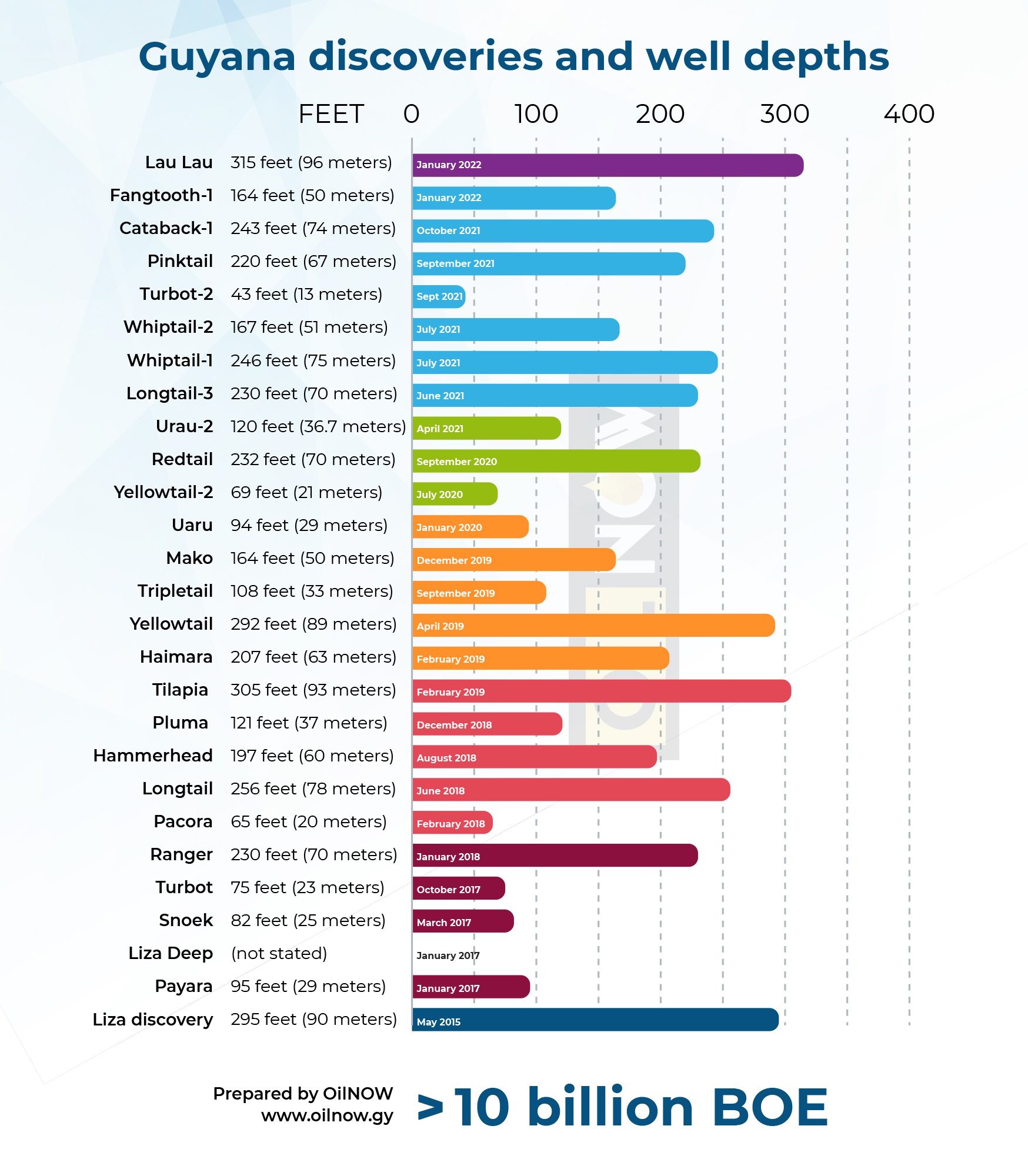 Speaking with OilNOW recently, Natural Resources Minister, Vickram Bharrat said the discoveries thus far by ExxonMobil and its joint venture partners, Hess Corporation and CNOOC Petroleum Guyana Limited, continue to boost Guyana’s status as a key player in the industry. He was keen to note however that the discoveries alone will not, by itself, translate to a better life for the citizenry.

Mr. Bharrat said, “Under the stewardship of His Excellency, President Irfaan Ali and Vice President, Dr. Bharrat Jagdeo, the Guyana government is pursing the implementation of a robust legislative framework to protect the interest of our people and to guarantee the prosperity of future generations.”

He said the Ali-led government has kept its word to deliver the passage of the Local Content Law and the Natural Resource Fund Law.

“Both instruments will ensure there is transparency and accountability in the expenditure of the oil money and more benefits retained for citizens. We are clearly putting the platform in place that will see Guyana being a leader in the sustainable development of oil resources,” the natural resources minister said.