OilNOWLatest News and Information from the Oil and Gas sector in Guyana
More
FeaturedNews
Updated: November 20, 2021

Liza was biggest, best prospect in a basin with zero discoveries…next target was a dry hole 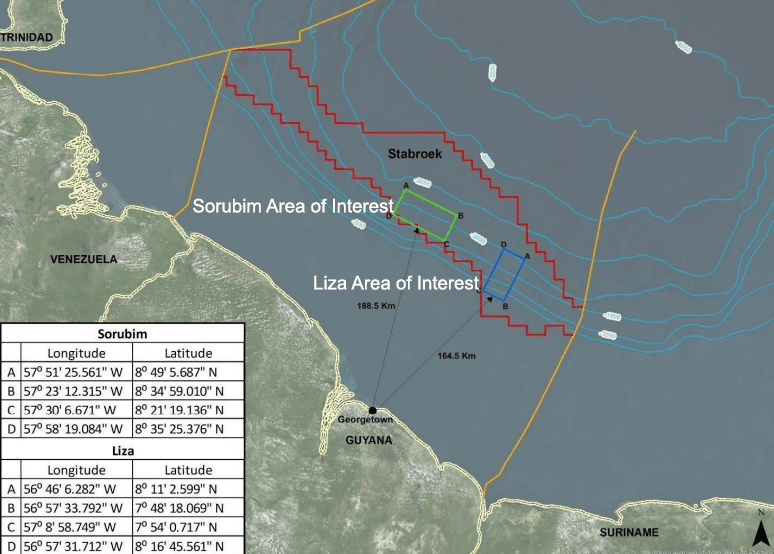 Back in 2014, geologic models indicated a potential working hydrocarbon play in the Stabroek Block. The closest known hydrocarbon accumulations were located onshore Suriname and offshore Venezuela. At the time there were no wells in the Stabroek Block, but data from existing wells from other areas surrounding the block demonstrated the presence of Cretaceous source rocks in the shallow waters of the Guyana shelf located landward of Stabroek.

Geologic models also suggested that the Cretaceous source rocks were mature and generating hydrocarbons in portions of the deepwater basin offshore Guyana. Tertiary and Upper Cretaceous turbidites deposited in deepwater settings were determined to be the Stabroek Block’s potential reservoir rocks.

U.S. oil major ExxonMobil had secured a 10-year exploration license from the Government of Guyana on the Stabroek License Area, which was one of eight petroleum exploration blocks, and the largest (6.6 million acres) to be awarded at the time.

In its Strategic Environmental Assessment submitted to the Environmental Protection Agency in March 2014, Exxon had identified two prospective areas in the Stabroek Block (the Sorubim and Liza Areas of Interest) and proposed to plan for the drilling of up to two wells (one well per area) in the block to further evaluate the petroleum resources. The primary objective of the drilling program was to evaluate the prospects identified previously by seismic surveys. The company had not yet determined the exact number of exploration wells to be drilled, or their exact locations, and wanted to maintain maximum flexibility in terms of the number and location of the wells so that the most advantageous drilling scenario could be worked out.

In an interview with OilNOW back in 2017, Doug Mc Gehee, then Upstream Operations Manager at ExxonMobil Guyana, reflected on what led to the decision to drill the Liza-1 prospect first. He said there are several elements that need to line up in order to have a successful exploration play. These include source, reservoir, trap and then maturation, timing, migration and seal. He said all seven of these have to work for a successful discovery.

“Generally, you drill the biggest, best prospects first when you enter a new area, which is what we did with Liza-1,” he said.

This approach paid off big time and forever changed the history of the Guyana basin. The other well that was identified at the time – Sorubim – turned out to be non-commercial and the very next well to be drilled by Exxon after Liza – Skipjack – was also a dud.

Following the disappointment at Sorubim in 2018, Exxon Mobil Corporation’s Vice President of Investor Relations and Secretary, Jeffrey Woodbury said the dry hole encountered at the well does not condemn prospect opportunities for the massive Stabroek Block. He was asked by investors if the negative results at Sorubim, a potentially different play type, would mean the prospect of a third rig option for exploration has been abandoned. “Every time we drill one of these wells, we pick up some additional insight and learnings and I wouldn’t say that the well in itself condemn the play or the prospect opportunities we’ve got in Stabroek Block.”

Woodbury was correct. The company went on to make multiple discoveries after Sorubim, raising its estimated recoverable resources from 3.2 billion barrels of oil equivalent (boe) at the time to what is now more than 10 billion boe.

Facebook
Twitter
Pinterest
WhatsApp
Linkedin
Email
Telegram
Previous articleConstruction of additional berths at Guyana Shore Base 60% complete; to be ready by second quarter of 2022
Next articleBrent falls below $80/b amid new lockdowns, stronger US dollar