OilNOWLatest News and Information from the Oil and Gas sector in Guyana
More
FeaturedNews
Updated: March 22, 2022 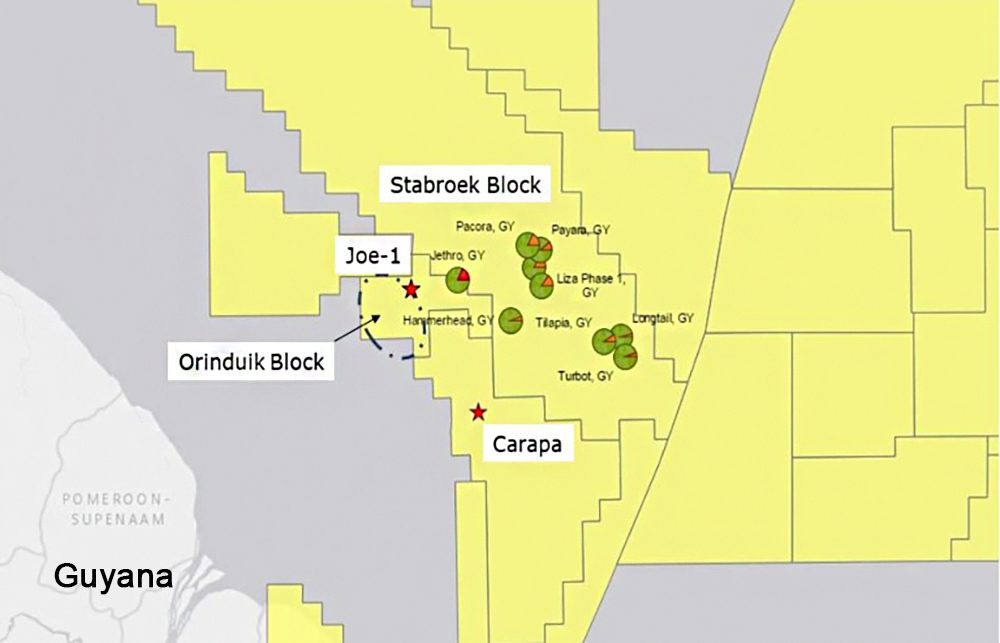 Eco (Atlantic) Oil & Gas Ltd., which commissioned and released the report on Monday, said the CPR also speaks to its other assets offshore Namibia and South Africa. As regards its net share of the prospective resources in the Orinduik Block, Eco said it is entitled to 681 million barrels of oil and 544 billion cubic feet of gas.

Following the release of the report, Colin Kinley, Co-Founder and Chief Operating Officer (COO) of Eco Atlantic, said the company’s current strategy for increasing stakeholder asset base, has allowed it to be focused solely on strategic acquisitions that can add material and near-term growth for the company.

Kinley said, “The addition of the Azinam assets in Namibia and South Africa has quickly added prospective resources to our portfolio. As we work towards the completion of our recently announced binding term sheet to acquire JHI’s 17.5% interest in the Canje Block offshore Guyana plus the maturation of additional resources currently being interpreted from ongoing 3D processing in Block 3B/4B, we expect to see even further growth of the portfolio from here in the coming months.”

Significantly, Kinley said Eco’s acquisitions and strategy to deliver mature drillable prospects in the near term is driven in part by the current heated energy market, the reduction in worldwide exploration, and the marked cycling it anticipates through energy transition in the coming years.

Additionally, the COO said Eco has the capacity to participate and provide strategic value accretion through the drill bit. “…We are also confidently progressing towards drilling in Orinduik block offshore Guyana, subject to available funding, and look forward to confirming a drill target and timing with our partners in the coming months,” Kinley stated.

Assuming the acquisition of JHI is completed as planned in the coming months, Kinley said this will also provide Eco with the opportunity to participate in a number of targets on the Canje Block as prospects are matured by operator ExxonMobil.

Eco (Atlantic) Guyana Inc., the company’s wholly owned subsidiary, currently holds a 15% interest in the Orinduik Block offshore Guyana governed by a petroleum agreement between the subsidiary, the Government of Guyana, Tullow Guyana B.V. and TOQAP Guyana B.V which holds a 25 percent working interest and is jointly owned by TotalEnergies E&P Guyana B.V. (60%) and Qatar Energy (40%).

Effective June 28, 2021, Eco became the indirect owner of an interest in the Canje Block offshore Guyana through the acquisition of a 6.4% interest (and up to 10% on a fully diluted basis) in JHI Associates Inc., a private company incorporated in Ontario and headquartered in Toronto, Canada.

Eco is in the development stage and has not yet commenced principal producing operations other than acquiring and analyzing certain pertinent geological data in Guyana and Namibia and drilling two exploration wells in Guyana.

Eco is currently engaged in the exploration and development of its properties, in addition to evaluating the Jethro and Joe oil discoveries in the Orinduik block, to determine the appropriate appraisal approach.

OilNOW previously reported that fluid samples were taken from both wells and were sent for analysis by the Operator. Samples recovered from Jethro-1 and Joe-1 were mobile heavy crudes, not dissimilar to the commercial heavy crudes in the North Sea, Gulf of Mexico, the Campos Basin in Brazil, Venezuela, and Angola, with high sulphur content.