OilNOWLatest News and Information from the Oil and Gas sector in Guyana
More
FeaturedNews
Updated: May 9, 2021 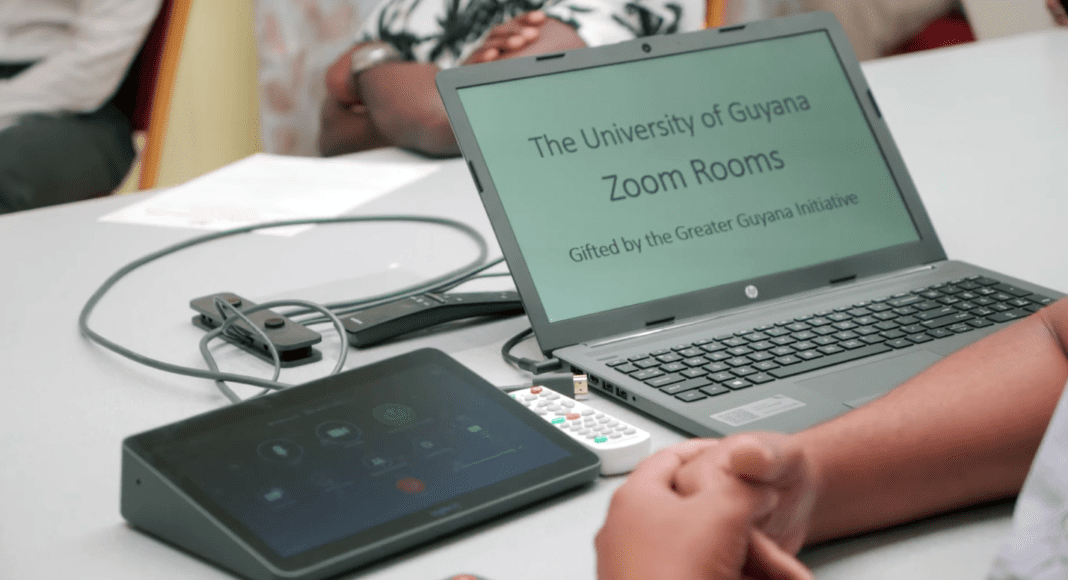 The ‘Zoom Rooms’ project recently launched by the University of Guyana (UG) and funded by ExxonMobil’s Greater Guyana Initiative is benefitting hundreds of UG students who now have easier access to virtual classes necessitated by the COVID-19 pandemic.

Zoom Rooms are facilities set up by UG across Guyana that enable access to online classes by students who find it difficult to attend because of a lack of resources or other challenges. With full support from the oil company, UG has been able to establish 18 Zoom Rooms so far, which have benefitted hundreds of students.

Vice Chancellor (VC) of UG, Professor Paloma Mohamed-Martins said the Zoom Rooms had an immediate and positive impact on the university’s delivery of classes. “The day after the ‘Zoom Lab’ was launched, over 600 students began to use it for Chemistry,” she told OilNOW.

She said there are seven such facilities outside of Georgetown, three in Berbice, one in Linden, one in Mabaruma, one in Anna Regina, and one in Bartica. The others are located in UG’s Turkeyen and Berbice campuses.

The VC asserted that the ExxonMobil Guyana-supported project will be of immense benefit as UG strives to  meet the objectives of ‘Blueprint 2040’—the university’s 20-year plan to ensure that every Guyanese household has at least one university graduate, and to improve the overall delivery of UG’s services.

She said, “What [the Blue Rooms project] allows us to do is really move a lot faster towards this goal of one graduate per household because it, therefore, means that people don’t necessarily have to leave their home communities to access certain types of education.”

Meanwhile, UG’s Director of the Tactical Online Services Unit, Mr. Malcom Williams pointed to the difficulties students were experiencing, which led to the development of the project.

“In the initial stages, the lecturers and staff would have used Zoom meetings, Zoom webinars and other online conferencing tools. That worked for a bit, but then our students, they started making much more sophisticated demands.

“They were asking for us to facilitate them being in class—those who do not have laptops and tablets and so forth. They wanted to know whether they can come back to the classroom if we observe all of the COVID protocols,” he explained. But there were also students who preferred to remain at home in the comfort and convenience of their private spaces.

Mr. Williams continued, “So, we had to rethink what we’re doing and we came up with this idea that if we were to get to facilitate communication, collaboration and coordination, then we would be able to help both sets of students.”

The Zoom Rooms project is the first to utilize funds under ExxonMobil’s Greater Guyana Initiative—a $20 billion, multi-year commitment that seeks to build capacity in Guyana.