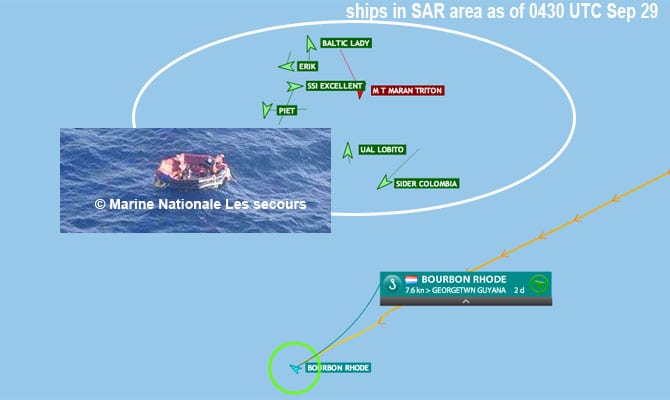 The search for tug supply vessel Bourbon Rhode continues with the full support of Cross AG (Regional Operational Center of Surveillance and Rescue) and the French navy, under the authority of the Prefect representing the French national maritime authority.

Five commercial vessels have changed course in order to bring assistance to the rescue teams. A Falcon 50 of the French navy as well as the aircraft of the American National Hurricane Center (NHC) conducted numerous overflights of the search area.

On Saturday evening a capsized fast rescue craft was spotted first by the NHC aircraft and then by the Falcon 50. A commercial vessel engaged in the operation is currently headed in its direction in order to try to recover it.

BOURBON’s crisis cell and teams remain fully mobilized to keep track of the situation and maintain contact with the families of the crew members, bringing them their full support in this difficult time.

Three crew members have so far been rescued while 11 others remain missing.

The Bourbon Rhode was en route from Las Palmas in the Canary Islands to Georgetown, Guyana.

Bourbon Rhode mishap: no trace of life detected in 10 days