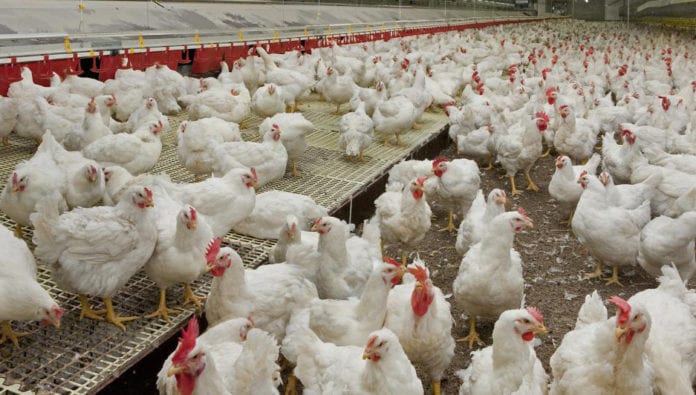 As momentum picks up in Guyana’s emerging oil and gas industry, the demand for various goods and services is steadily rising. One of the areas already being impacted is the agriculture sector.

In recent months, it has been found that the local poultry sector –the largest agriculture subsector –is grappling to meet an increasing demand for poultry meat from fast food outlets.

“The demand is up a bit because we have a lot of foreigners in the country and they head straight into those fast-food outlets that are popular and well-known in the world so we see an increase in demand for fast-food chains especially,” David Fernandes, Assistant Managing Director of Bounty Farm said in a recent interview.

Bounty Farm Limited produces 38% of the local demand for poultry products. Mohamed’s Farm on the East Bank of Demerara which produces the products branded Royal Chicken, follows closely behind to supply the local market.

In Guyana, the agriculture sector, with the exception of the sugar estates, is privately owned.

“Prior to oil coming into our lives in Guyana, we had a more or less stable market, only certain times of the year you’ll see a certain increase –whenever there’s a holiday or Christmas –now there’s an increase beyond that,” Fernandes said.

He said all of the local producers have had to increase their production.

The Caribbean Poultry Association (CPA) last week held a technical symposium in Guyana under the theme: “Improving Competitiveness of the Caribbean Poultry Industry.” Listed on the topic for discussion was hatchery, the status of Caribbean poultry, feeds and legislation governing the sector.

The symposium opened on Thursday at the Princess hotel at Providence on the East Bank of Demerara, on the outskirts of Guyana’s capital, Georgetown.

Chief Executive Officer of the Guyana Livestock Development Authority (GLDA), Nigel Cumberbatch made the first presentation where he noted that 5.4M broilers are produced for the live market per annum. “There is also a growing demand coming from the oil and gas sector,” he said.

There, Minister of Agriculture, Noel Holder disclosed that in 2018, the total contribution of livestock to Guyana’s Gross Domestic Product (GDP) was 3%. But he said the year recorded the highest production of livestock –44,800 metric tonnes –a 37% increase from 2017.

Mr. Holder said poultry accounted for 94% of the 44,800 tonnes of livestock produced “due to increased consumer demand.”

He disclosed that the Government of Guyana has been promoting its inter-mediate savannah for large scale agricultural investments.

Deputy Secretary-General of the CARICOM Secretariat, Joseph Cox said the association’s exchange is timely as Guyana is set to become the “regional mecca for oil and gas production” which will lead to dynamic transformations.

He said in order to ensure that the private sector is able to meet its demand, there needs to be an “even more focused attention on improving the business climate and for the state to adapt to its role of facilitator in the new paradigm.”

This necessitates that transaction costs are minimized and that the requisite transparency guarantees which are associated with optimized public policy are provided, he noted.

The Deputy Secretary General said across the region, there needs to be a mindfulness of “burgeoning bureaucracy and a costly regulatory environment which effectively create barriers to formal investments and are a disincentive to increased productivity and growth.”

To meet this rising demand, the CARICOM officials said it is imperative that countries develop a thriving and viable agriculture sector including crop and livestock production, fisheries and aquaculture that will form the foundation for becoming food secure by 2050.

The agricultural sector accounted for almost one in every five jobs (18.9%) in the Guyana economy in 2017. With the oil and gas sector steadily expanding, the Government has been pushing the need to invest in other sectors including agriculture to steer clear of the much talked about Dutch disease.

Why explorers are in the grip of an existential crisis