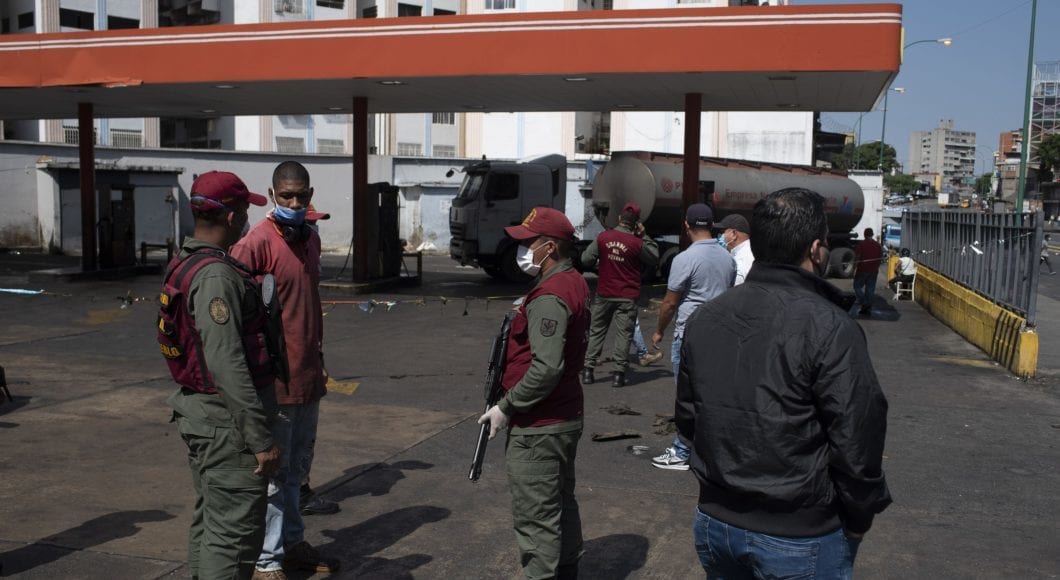 The South American country of Guyana is on course to receive the highest estimated total income from...
Read more

The largest oil and gas companies in the world,...
Read more
OilNOW
OilNow is an online-based Information and Resource Centre which serves to complement the work of all stakeholders in the oil and gas sector in Guyana.

(Bloomberg) — The few gasoline stations still open in Caracas are manned by armed soldiers, and those waiting to fill their vehicles in day-long lines are only security personnel and designated medical and food suppliers.

Under coronavirus quarantine like most of the world, Venezuelans are used to shortages after seven years of economic meltdown. But in the past few weeks, as U.S. sanctions tighten with a vise-like grip, something unprecedented is occurring: the country with the world’s largest oil reserves and one of South America’s biggest refining facilities is nearly out of gasoline.

The ports haven’t received gasoline imports in more than five weeks, according to people familiar with the situation and ship-tracking data compiled by Bloomberg.

Small protests have broken out, raising the specter of a repeat of deadly unrest from earlier years. International aid agencies say they can’t move around easily. And a black market is growing in the capital with gasoline — essentially free for decades — now selling for $1.50 a liter ($5.67 a gallon).

Since the U.S. imposed sanctions on Venezuelan oil 14 months ago as part of its effort to drive Cuban-backed President Nicolas Maduro from office, major traders have shied away, leaving state oil company Petroleos de Venezuela searching for suppliers, according to people familiar with the situation.

PDVSA has offered to barter a barrel of gasoline for as much as three barrels of crude delivered a week after the cargo is discharged. Smaller and less-experienced traders have declined.

As a result, there is an acute lack of gasoline, with no solution in sight. “Venezuela has no gasoline inventories, so it can’t deal with a shortage,” said energy consultant Nelson Hernandez.

The impact is felt especially in Caracas, once a privileged bubble protected from the fuel scarcity elsewhere in the country over the past year. Deliveries of food and medicine are slowing to a crawl as the city tries to cope with the virus.

Over the past three weeks, authorities have imposed rationing at gas stations nationwide, ordering owners to hand over control to military personnel, who review credentials of authorized drivers at the pumps.

Relations between the U.S. and Venezuela have been poor since the socialist Hugo Chavez took office in 1999, followed by his deputy Maduro in 2013. His re-election two years ago was declared fraudulent by a range of international observers and institutions. In 2019, the U.S. led an effort of more than 50 countries to recognize opposition leader Juan Guaido as president.

But Maduro has hung onto power. In the weeks since coronavirus hit, the Trump administration has redoubled its efforts to pressure him, sensing a growing vulnerability. In late March it indicted him on drug trafficking and offered $15 million to anyone helping in his arrest, along with another $10 million for those aiding in the arrests of his top lieutenants.

Last week, it laid out a plan that would lead to the lifting of sanctions in exchange for Maduro stepping aside, free elections being held, and democratic institutions restored. The American approach is based on one championed by Guaido, rejected by Maduro.

Venezuela’s woes are compounded by the collapse of oil prices as a result of Saudi-Russian competition on top of the massive falloff in demand caused by the pandemic. It now costs more to produce a barrel of Venezuelan crude than it fetches in a sale, which Maduro acknowledges. He even put forth his own unity proposal but without offering to step aside, which the opposition and U.S. consider nonnegotiable.

Meanwhile, health personnel, food suppliers and officials sit for hours in lines that stretch for miles at just a handful of gas stations.

Jorge Gallegos, a dairy products driver, spent 10 hours last Wednesday at a gas station. He’s losing two days per week just filling up his tank, he said. “I arrived at 4 a.m. and won’t be able to deliver products today.”

As shops and restaurants see customers retreat for the quarantine, they rely even more on delivery services. But fuel shortages have hit them hard. Businesses are scheduling several days a week to fill their motorbike tanks. Motorcyclists have been limited to as little as 5 liters (just over 1 gallon) per bike.

“It’s been terribly problematic,” said Christian Acuna, co-owner of a restaurant in eastern Caracas. “Delivery personnel fail to show up at work due to the lack of public transportation, so we’ve had to offer pick-up service only.”

PDVSA’s refining capacity has been on the decline for years due to low maintenance, minimal investment and brain drain. In September 2018, months before the U.S. imposed sanctions on oil, it was refining at 24% of its potential. In December, refineries were working at less than 10%.

Venezuela’s demand has now dropped to about 90,000 barrels a day of gasoline and diesel, according to consultant Hernandez, down from a combined 350,000 barrels eight years ago. Even so, demand is far outstripping supply.

Far from the capital, in region’s which have long had to deal with severe gasoline shortages, reports are arriving of farmers having to throw away their crops due to a lack of fuel to transport them.

Venezuela has reportedly obtained fuel from Iran in return for plane loads of gold, according to comments...
Read more
News

(Reuters) - Oil prices fell on Tuesday as Europe and the United States grappled with a surge in new coronavirus infections and...
Read more
News

The South American country of Guyana is on course to receive the highest estimated total income from its multi-billion-barrel oil and gas...
Read more
News

Keppel Corporation Limited (Keppel) said Tuesday it plans to unlock value from S$3-5 billion of assets over the next 3 years as...
Read more

(Reuters) - Oil prices fell on Tuesday as Europe and the United States grappled with a surge in new coronavirus infections and...
Read more

The South American country of Guyana is on course to receive the highest estimated total income from its multi-billion-barrel oil and gas...
Read more