Tillerson has 180 million reasons not to return to oil industry 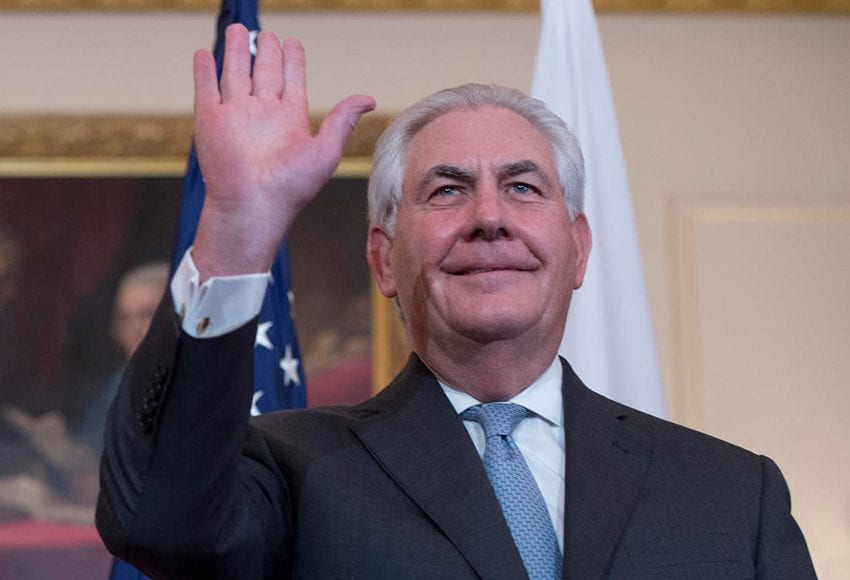 (Bloomberg) — It isn’t clear where Rex Tillerson goes from here, but he has 180 million reasons to avoid the oil industry.

The freshly ousted Secretary of State’s exit package from former employer Exxon Mobil Corp. stipulates that if Tillerson returns to the private sector to work for a competitor, he could forfeit roughly $180 million in deferred compensation.

Exxon created a payout plan in January 2017 for Tillerson, who had led Exxon since 2006 before serving in the Trump administration, to compensate him for more than 2 million unvested shares and stock units while removing any conflicts of interest. Tillerson surrendered his stock awards in exchange for a cash payment to an independently managed trust — the trust then distributes money to Tillerson according to a schedule that mirrors Exxon’s long-horizon vesting schedule, which can last as long as 10 years.

A provision of Tillerson’s ethics agreement says that he must give up any undistributed assets in the trust if he becomes employed by or provides services to “a company in the oil and gas industry or the oil and gas services industry.” The terms cover being a consultant, contractor, director or paid employee.

The Rexit: Tillerson is Out

The forfeited assets would then be paid out to a charity of the trustee’s choosing dedicated to the alleviation of disease and poverty in the developing world, according to the plan.

Despite his resume, Tillerson may find little demand for his services post-State Department. The 65-year-old Texas native spent his entire career at Exxon. No rival oil explorers operate with quite the same corporate culture or long-term view that the direct descendant of John D. Rockefeller’s Standard Oil has fostered among its executive class.

Reginald Brown, a lawyer for Tillerson, and Scott Silvestri, a spokesman for Exxon, declined to comment.

Tillerson’s ethics agreement also helped him to avoid an immediate federal income tax bill of as much as $72 million, according to tax specialists who reviewed his plan at the time. Ordinarily, cash payments made in lieu of unvested stock awards would trigger an immediate income-tax liability for the recipient. Instead, the former secretary of state was just subject to ordinary income tax payments as the payouts trickled in, instead of all at once.

Tillerson was able to defer the immediate tax bill because of Internal Revenue Service rules governing the type of trust created. The beneficiary — Tillerson — must face a “substantial risk of forfeiture” of the trust’s assets to defer payment. Tillerson’s lawyers have argued that because he risks losing it all if he works for a competitor, that risk exists — an argument that some tax experts have questioned.

“The question is: can he continue to defer, or does it now become taxable?” said Michael Kosnitzky, a tax partner at Pillsbury Winthrop Shaw Pittman LLP. “Does continued deferral happen because he’s now out of government?”

To comply with conflict-of-interest rules, the trust was barred from investing in any Exxon securities. An Exxon filing in January 2017 said the trust could invest its cash only in U.S. Treasuries and diversified mutual funds.

But the trust may now be free to go back to investing in Exxon stock. The filing says that the trustee can’t buy or hold any Exxon securities, from stock to bonds to derivatives, as long as Tillerson is “an officer or an employee of the United States.”

Iran warns US against disrupting fuel shipments to Venezuela