OilNOWLatest News and Information from the Oil and Gas sector in Guyana
More
ExplorationFeaturedNews
Updated: August 26, 2022 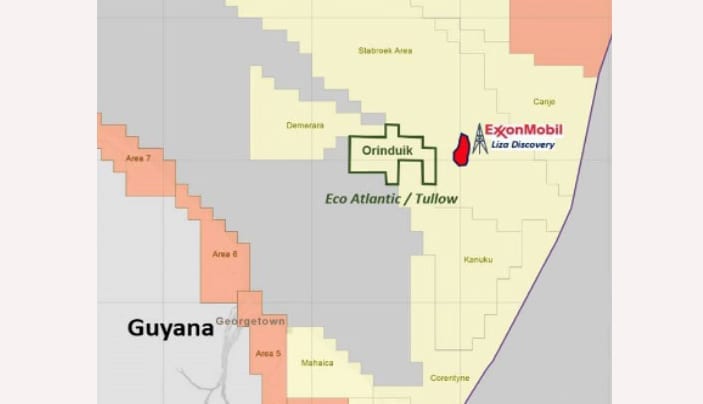 The Orinduik Block partners are expected to relinquish 20% of the acreage as the first renewal period of the license draws to a close, taking approximately 360 square kilometers (km2) off the 1,800 km2 block.

Eco (Atlantic), a partner in the license, said in a Thursday report, that the partners will enter the second exploration phase of the petroleum prospecting license, before which, they are required to conclude the relinquishment.

The first phase commenced on January 14, 2020, and will conclude on January 13, 2023, Eco indicated. The second will last three years until 2026, during which the terms of the license require one exploration well to be drilled. Eco estimated, on a preliminary basis, that the lone well will cost US$30 million.

According to Dr. Michael Green of Align Research, who interviewed Eco-Atlantic’s Gil Holzman, the Orinduik Block partners are preparing to submit drilling commitments to the Government of Guyana before the year ends.

Dr. Green said the two latest discoveries made at the Seabob-1 and Kiru-Kiru-1 at the neighbouring Stabroek Block, operated by ExxonMobil, are on trend with the contractor group’s light oil targets in the southeastern corner of the Orinduik Block.

The analyst said, “Each discovery made in the Stabroek Block is extremely positive and helps Eco better target its next drilling campaign.”

A recent report updated the gross estimate of resources in Orinduik to 8.1 billion barrels, to which Eco is entitled to 681 million barrels of oil and 544 billion cubic feet of gas.

Due to the high oil price situation caused by the fallout from Russia’s invasion of Ukraine, the Orinduik partners are revisiting the commercialisation potential of the Jethro discovery, which holds more than an estimated 100 million barrels.

The Guyana government intends to pursue more favourable terms for contracts outside of the Stabroek Block, should operators apply for a production license. Vice President Dr. Bharrat Jagdeo said last Friday, to his knowledge, that the partners have not approached the government as yet on this matter.