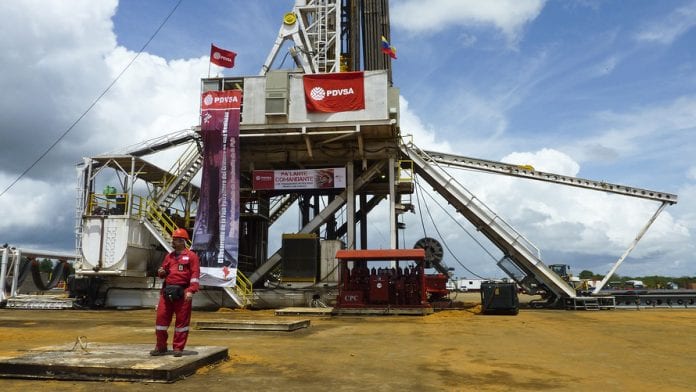 (Bloomberg) — Venezuela is set to pump the least oil in almost three decades, just when it needs petrodollars the most.

Output is expected to slump to 1.84 million barrels a day next year, the lowest compared with official government data since 1989, according to a survey with four analysts compiled by Bloomberg. Rig counts hit a 14-year low in October, as drilling companies including Schlumberger Ltd. reduce their exposure in the nation due to unpaid bills.

Owner of crude reserves larger than Saudi Arabia’s, Venezuela is teetering on the brink of default. Production of oil, the key commodity that brings in badly needed dollars to service Venezuela’s debt, will shrink for the seventh year. It’s not only that output is declining, says Thomas Olney, an analyst at consultant Facts Global Energy. Quality is going down as well, chipping away at revenues for state-owned oil company Petroleos de Venezuela SA.

“Drilling is coming off in Venezuela, crude quality is deteriorating rapidly,” Olney said in a phone interview from London. “The U.S. sanctions make it even more difficult for Venezuela to buy the chemicals needed in the drilling process. Of course, this all makes it more challenging for Venezuela to continue generating cash.”

Olney recently revised down his production estimate for next year to 1.95 million barrels a day, from 2 million previously.

Venezuela’s foreign exchange reserves have dropped below $10 billion. The government has scheduled a meeting with bond investors for Monday, after announcing plans to renegotiate its massive debt burden.

Refiners on three continents say that the quality of Venezuelan oil has been going downhill more noticeably this year. Buyers have turned away some cargoes, while claims for discounts on others are mounting, according to people with knowledge of the situation.

In the U.S., Phillips 66 rejected cargoes of Venezuelan Merey 16 oil due to high salt content. Excess water and contaminants such as salt accelerate corrosion of pipes and equipment, resulting in unwanted downtime just as refineries are running hard to meet growing global fuel demand. Vessels sit outside Venezuelan ports for days waiting for inspectors hired by U.S. buyers to verify if the crude meets specifications.

In Asia, a buyer said claims for refunds on the poor-quality oil are piling up. In addition to the cost to repair damage from corrosion, refiners have to spend more money to treat the contaminated mix of water and oil, known as slops.

A refiner in Europe and another in Japan say they have reduced purchases of Venezuelan oil not only because of low quality, but also because of growing concerns over doing business with the state oil company amid the ongoing humanitarian crisis and U.S. sanctions. The buyer in Japan said PDVSA has been attempting to lure them back by offering “steep” discounts.

The bigger discounts are damping the benefit from higher prices, as the country’s oil basket more than doubled since early 2016 to the highest in two years.

“These higher levels are positive for PDVSA, but not to the extent where they will boost production,” said Luisa Palacios, a director with Medley Global Advisors LLC who’s also a fellow at Columbia University’s Center on Global Energy Policy, said by phone from New York.

“Output will remain in decline beyond 2020 due in large part of the extensive deterioration of equipment and the loss of skilled labor in Venezuela, both of which will take multiple years to repair,” she said by email. “There’s little if any investment traveling upstream and, with forthcoming debts still in limbo, investments will be held back by both PDVSA and private sector participants.”

As refiners consider alternatives to Venezuelan oil, U.S. Gulf refiners are the most vulnerable, as they rely on the South American country’s heavy, tar-like crude for 20 percent of their supplies, according to Energy Information Administration data. PBF Energy Inc.’s chief Tom Nimbley said in a conference call they had no problems in substituting Venezuelan oil.

“A default could complicate exports, blending and trading operations, with the U.S. likely to face the brunt of the shortfalls in the event that creditors attempt to seize some cargoes,” he said by email. “As nearly two-thirds of the country’s production is controlled by Chinese and Russian companies that will ensure production continues, to repay their own debt.”