OilNOWLatest News and Information from the Oil and Gas sector in Guyana
More
FeaturedNews
Updated: August 15, 2022

This is according to analysis from Wood Mackenzie, a global research and consultancy group based in the United Kingdom.

“Basins drop off the list as they mature and fall below this threshold,” WoodMac said. “Exploration occasionally opens up new super basins, with Santos (Brazil), Rovuma (Mozambique) and Guyana (including Suriname) added to the list since 2000.”

Guyana among potential ‘energy super basins’ of the world – WoodMac

The consultancy group said future success by frontier wildcatters may add a handful more, with regions such as the Orange Basin of Namibia and South Africa perhaps being the next strongest candidate.

Importantly, WoodMac said decarbonising the upstream is the industry’s most pressing sustainability task. Traditional super basins enjoy economies of scale and efficiencies, which help lower Scope 1 and 2 carbon intensity, but are not enough. High-carbon sources of supply must be displaced by advantaged, low-carbon resources.

“The initial focus must be on slashing scope 1 and 2 emissions.” WoodMack said.

Guyana is positioned to play a major role in delivering low carbon intensity barrels to a global economy still dependent on fossil fuel to meet its energy needs. Hess Corporation, a 30% stakeholder in the prolific ExxonMobil-operated Stabroek Block offshore the South American country, has said the world will need those low cost, high value resources.

The country is already positioned to be one of the highest margins, lowest carbon intensity areas, delivering the highest growth globally. 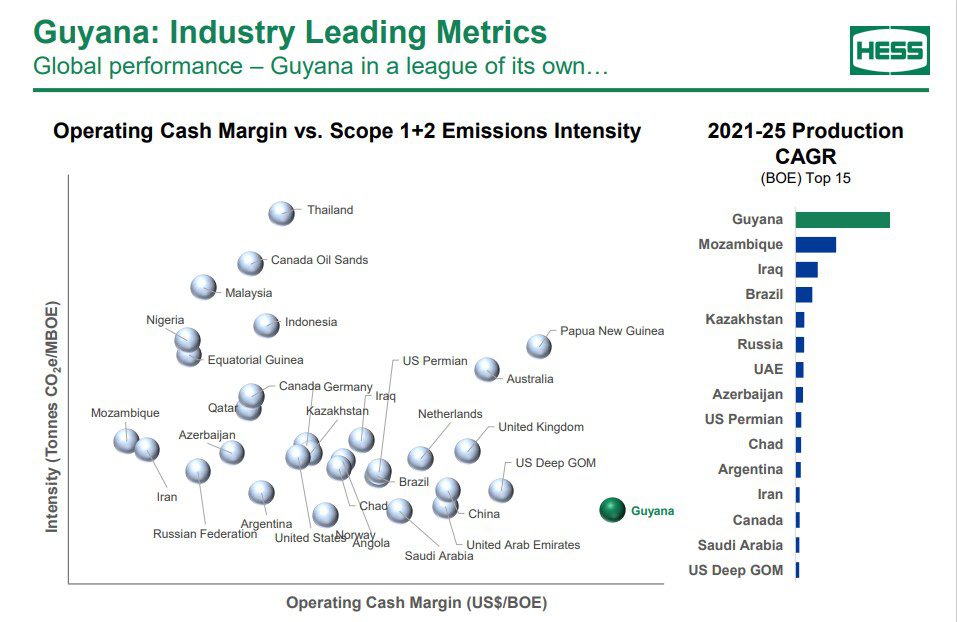 Guyana’s Vice President Dr Bharrat Jagdeo announced in December that Exxon has been given the green light by the government to conduct carbon capture and storage (CCS) studies so that the company may utilize it in its offshore operations.

“Exxon sought permission and we have given that permission to do a study on carbon capture and storage,” Mr. Jagdeo said.

To date, approximately 11 billion barrels of oil equivalent resources have been found at the Stabroek Block, making Guyana the biggest emerging super basin on the planet.