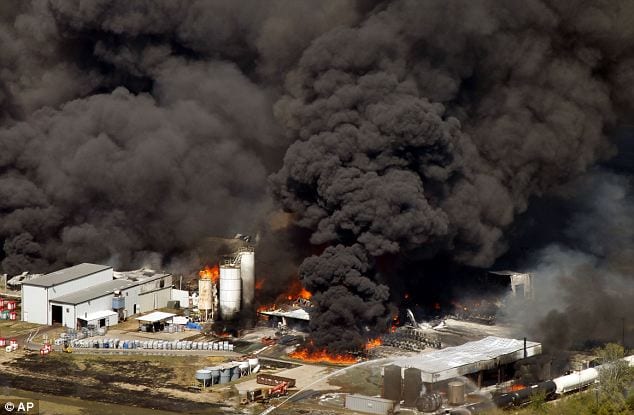 (CNBC) Flames and smoke could be seen coming from the Arkema plant in Crosby, Texas, on Friday evening.

That came after a container of organic peroxides exploded and caught fire early Thursday, sending acrid smoke into the air. An executive had said up to eight more containers could burn and explode.

Arkema said Harvey’s floodwaters engulfed its backup generators and knocked out the refrigeration necessary to keep the compounds from degrading and catching fire.

The Environmental Protection Agency and local officials said an analysis of the smoke that came from the plant early Thursday showed no reason for alarm. No serious injuries were reported. Still, authorities evacuated an area around the plant.

Fire officials said they were aware of one trailer containing unstable compounds that went on fire at a Houston-area chemical plant that lost power after Harvey.

Rachel Moreno, a spokeswoman for the Harris County Fire Marshal’s Office, said fire officials know that one trailer filled with organic peroxides and possibly a second trailer was on fire at the Arkema plant in Crosby. Aerial video showed a towering fire and smoke coming from the plant.

The compounds are unstable because the plant lost refrigeration.

A day earlier, one trailer blew up, sending acrid smoke into the area. An area around the plant was evacuated, and Moreno said the department does not plan to expand it.

She added that the department believes that the sudden bursts of flame seen in television footage of the fire came from tires.