OilNOWLatest News and Information from the Oil and Gas sector in Guyana
More
News
Updated: May 30, 2018 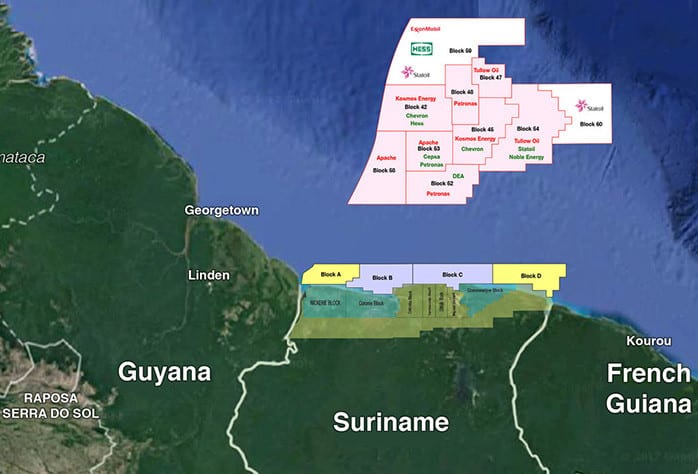 As the search for oil intensifies off the coast of Dutch-speaking Suriname, Managing Director and CEO of state oil company Staatsolie Maatschappij Suriname N.V., Rudolf Elias, is confident that a discovery will eventually be made.

The CEO said probability of an oil find offshore is high and the company is preparing itself for this eventuality. “Chances of success are greater than 50% and I don’t have any doubts – we are making ourselves ready for such an oil find.”

Hopes of a major offshore oil discovery in Suriname have risen in recent years following the 2015 world class Liza discovery made by ExxonMobil in neighboring Guyana. Since that time ExxonMobil, in partnership with Hess and CNOOC Nexen, has made multiple discoveries amounting to more than 3.2 billion barrels of recoverable oil.

Efforts to prove an extension of the Cretaceous fan play into Suriname have so far proved unsuccessful. In 2017, Apache’s Kolibri-1 exploration well in Block 53 was deemed non-commercial and followed on from the failure of the company’s Popokai-1 well in Block 58 in 2015. Tullow did establish the presence of gas condensate in its 2017 Araku well in Block 54, but did not find a significant quantity of reservoir rocks.

But optimism of a discovery remains high with drilling continuing at the Anapai reservoir even after Kosmos encountered stability issues in its first attempt at the Anapai-1 well a week ago. Kosmos holds rights in the Block 45 and Block 42 contract areas under production sharing contracts with Staatsolie.

Kosmos is expected to turn its attention next to either Aurora or Apetina in Block 42, as Suriname continues to bet big on a major discovery soon, encouraged both by ExxonMobil’s Guyana success and the United States Geological Survey which estimates that 13.6 billion barrels of oil and 32 trillion cubic feet of natural gas could lie in the Guyana-Suriname Basin.