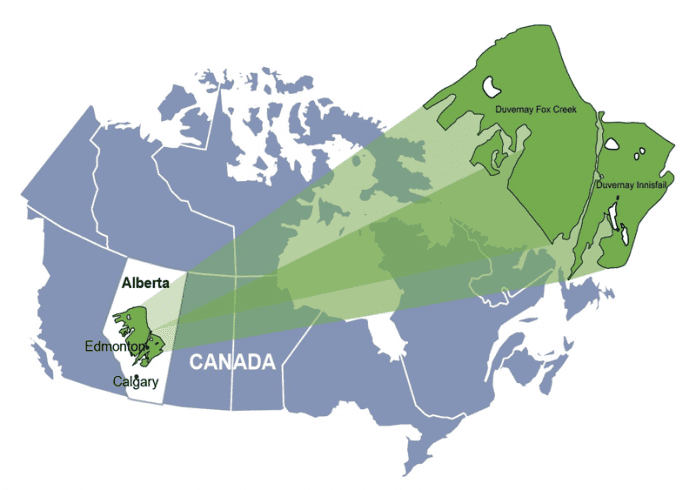 The decision, announced by the company on Monday, is a rare bright spot for Canada’s oil industry, which was hard hit by the global crude price downturn. International energy firms sold off nearly $23 billion in assets this year alone.

He did not comment on Chevron’s expected production or capital spend in the Duvernay, citing corporate disclosure rules, but said it was a major step forward for the company which has spent three years appraising the Kaybob area.

“This is a very significant business opportunity for Chevron Canada and our very first foray into development in the liquids-rich Duvernay,” Sollid told Reuters.

“Since we began appraisal drilling we have made significant improvements in costs and cycle times by applying Chevron’s learnings in other North American shale plays including the Permian in Texas.”

The Duvernay formation is one of Canada’s top shale plays and holds the country’s largest marketable resources of unconventional light shale oil and condensate, according to the national energy regulator.

Canada’s energy industry is still dominated by the vast oil sands sector in northern Alberta, but investment is climbing in the Duvernay and Montney shale basins, which offer faster returns and lower capital requirements than the oil sands.

Chevron first acquired leases in the Duvernay around eight years ago and is now one of the region’s biggest landholders.

The company also holds undeveloped land in the Liard and Horn River basins in western Canada, a 20 percent stake in Canadian Natural Resource Ltd’sAthabasca Oil Sands Project and non-operator interests in a handful of deepwater projects off the east coast of Canada.

As part of Chevron’s East Kaybob development Calgary-based Pembina Pipeline Corp will spend C$290 million building infrastructure to ship and process gas and condensate, which is expected to be in service by mid to late 2019.