OilNOWLatest News and Information from the Oil and Gas sector in Guyana
More
FeaturedNews
Updated: October 11, 2017 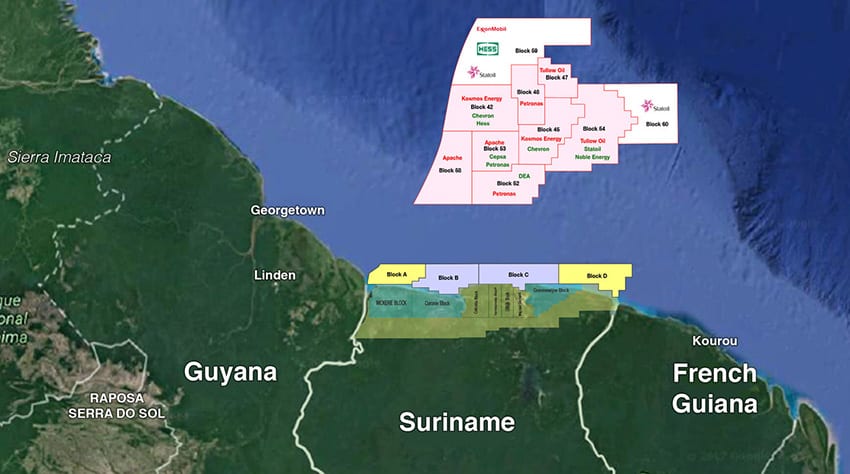 A fifth oil discovery announced last week by ExxonMobil off the Guyana coast has further increased expectations that similar play could be expected in neighbouring Suriname as Tullow Oil farms into the Araku prospect on Block 54.

Already, a 3D seismic survey carried out in 2015 at Araku, identified geophysical characteristics that are consistent with potential oil or gas effects in the target reservoirs.

Back in 2011, a consortium of mostly European oil and gas firms had found huge deposits of oil and gas off the French Guiana coast. So for them, it is only logical that Suriname, a country of approximately 500,000 people, would be the next hot spot.

Then beginning in 2015, ExxonMobil’s multiple discoveries off the Guyana coast served to prove beyond doubt that the basin contains three main ingredients for recoverable resources; source rock, reservoir rock and traps which seal and contain the hydrocarbons.

Exxon’s concession is less than 60 miles from the boundary with Suriname going northwest.

The United States Geological Survey estimates that 13.6 billion barrels of oil and 32 trillion cubic feet of natural gas could lie in the Guyana-Suriname Basin, making it the 2nd most prospective, underexplored offshore oil basins in the world.

Tullow has already indicated that the Araku prospect, which has encouraging amplitudes conforming to a large structure, could contain at least 500 MMbbl.