OilNOWLatest News and Information from the Oil and Gas sector in Guyana
More
FeaturedNews
Updated: April 20, 2022 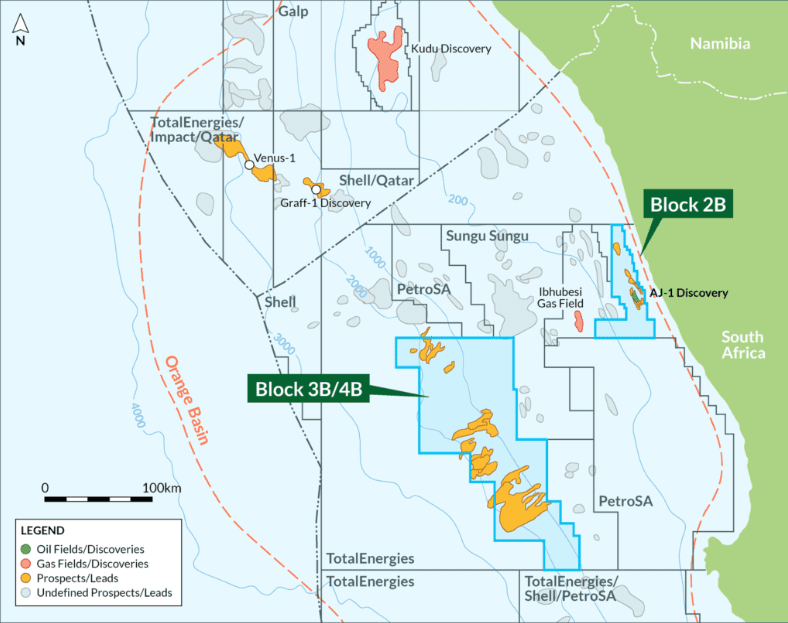 Eco Atlantic Oil & Gas Ltd. has placed US$20 million in escrow to support its capital expenditure for the Gazania-1 well in Block 2B offshore South Africa, its joint venture partner, Africa Energy Corp. said on Tuesday.

The Southern Oil Exploration Corporation, known commonly as Soekor, had discovered and tested oil in Block 2B in 1988 at A-J1, which intersected thick reservoir sandstones between 2,985 meters and 3,350 meters. The well flowed 191 barrels per day of 36° API oil from a 10-meter sandstone interval at approximately 3,250 meters.

In a 2020 corporate presentation, Panoro Energy said the Gazania-1 well is targeting best estimated gross prospective resources of 349 million barrels of oil. Panoro’s subsidiary has a 12.5% participating interest in Block 2B.

The joint venture contracted the Island Innovator semi-submersible rig, which will move from the North Sea in August for a 45-day journey to South Africa.

Africa Energy, which has a 27.5% participating interest in Block 2B, expects the well to be spud by October, with drilling to last 30 days.

Eco acquired a 50% operating interest in Block 2B, among other things, when it closed a deal in March for the acquisition of Azinam Group Ltd.

Block 2B covers 3,062 square kilometers approximately 25 kilometers off the west coast of South Africa near the border with Namibia in water depths ranging from 50 to 200 meters. Along with Eco Atlantic, Africa Energy and Panoro, Crown Energy AB indirectly holds a 10% stake.

Block 2B is located in the Orange Basin, where TotalEnergies and Shell announced the Venus and Graff discoveries offshore Namibia. Westwood Global Energy Group called them breakthrough discoveries, noting that they proved the presence of an extensive, prolific oil kitchen, and that its analysis suggests that “the Lower Cretaceous Venus play has a potential extent of up to ~58,000km², comparable to that of the Upper Cretaceous of Suriname-Guyana.”

It said a Suriname-Guyana scale oil province is “certainly possible”, “provided that the traps are present and the deepwater reservoirs are widespread and of good enough quality.”

Record 31 discoveries made offshore Guyana since 2015

Eco currently holds a 15% interest in the Orinduik Block offshore Guyana governed by a petroleum agreement with the Government of Guyana, Tullow Guyana B.V. and TOQAP Guyana B.V which holds a 25 percent working interest and is jointly owned by TotalEnergies E&P Guyana B.V. (60%) and Qatar Energy (40%).

Eco also announced in March that it signed a Commercially Binding Term Sheet to acquire 100% of JHI Associates Inc., including JHI’s 17.5% Working Interest (WI) in the Canje Block offshore Guyana.