OilNOWLatest News and Information from the Oil and Gas sector in Guyana
More
FeaturedNewsRegional
Updated: July 12, 2022 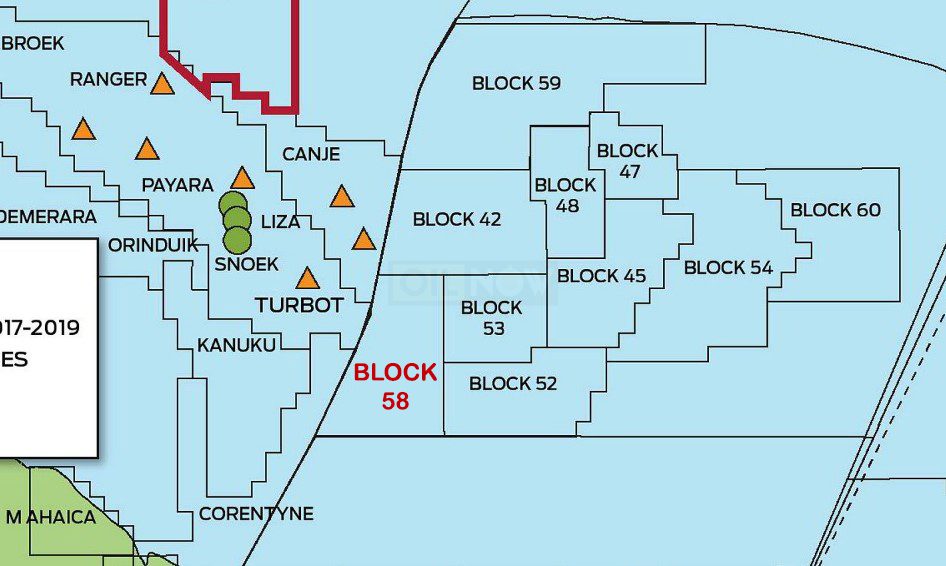 Controlled by TotalEnergies and APA Corporation, Block 58 has churned out major discoveries – five thus far. Though few, compared to Guyana’s Stabroek Block, the discoveries have piqued investor interest leaving a lingering question – could Block 58 become the next Stabroek?

With close to 11 billion proven barrels of oil equivalent (boe), spread across 30 discoveries, the ExxonMobil-operated Stabroek Block has already made its mark on the global oil and gas market. And its success will only grow tenfold as the Guyana government and Exxon press full steam ahead with its development.

It is this success that Suriname aims to emulate and even surpass with Block 58 that borders the Stabroek Block and spans some 1.4 million acres. TotalEnergies is the operator of Block 58, with 50% operating interest, while APA Corporation holds the remaining 50%.

Block 58’s five discoveries are at Maka Central, Kwaskwasi, Sapakara, Keskesi and Krabdagu. Kwaskwasi has been called a giant in the Guyana-Suriname basin, with analysts comparing it to Exxon’s Liza find in the Stabroek Block. Krabdagu has also caused quite a buzz for Suriname.

The non-commercial discovery at the Keskesi South-1 well was daunting to TotalEnergies and APA but Krabdagu brought renewed hope and excitement at the Block’s other prospects.

United States multinational investment bank Morgan Stanley had said in 2020, prior to the Keskesi and Krabdagu discoveries, that its modelling of Block 58 shows it contains a potential 6.5 billion barrels of oil equivalent resources which can be developed across seven phases.

TotalEnergies and APA are banking on more successful finds to up the current resource count.

Excitement brought to the Suriname side of the basin from the finds already made at Block 58 is stirring exploration activity in nearby prospects. Drilling at five high-impact wells is already planned for 2022.

And if the Dutch-speaking nation plays its cards right, it may get the sought-after Stabroek Block success.