OilNOWLatest News and Information from the Oil and Gas sector in Guyana
More
ExplorationFeatured
Updated: April 17, 2018 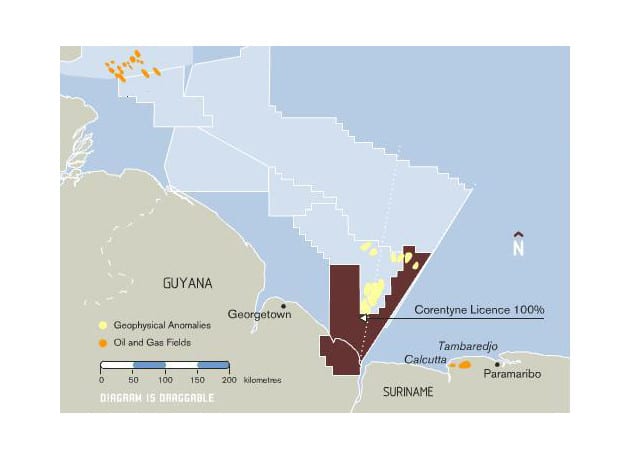 The latest released PSA was signed on November 27, 2012 by then President Donald Ramotar and Director at CGX Resources Inc. Dr. Edris K. Dookie.

According to a Ministry of Natural Resources statement accompanying the release of the contract, on November 27, 2012 Government awarded CGX a Petroleum Licence for the Corentyne Block and then in February 13, 2013, it awarded a Licence for the Demerara Block. The statement said that the company initiated various exploratory surveys “but over the years, work has been paused as further options are reassessed.”

CGX Resources Inc. in December 2017 committed to a restructured programme of work covering the Corentyne and Demerara Blocks.

The royalty specified in the PSA is a 1 percent payable by the Government of Guyana out of their share of the profit. Cost oil ceiling is set at 75 percent of the total production from the contract area. The remaining, or profit oil will be split 53/47 in favour of Government.

The PSA carries a Stability of Agreement clause which ties Government’s hands from amending, modifying, rescinding, terminating, declaring invalid or unenforceable, requiring renegotiation of, compelling replacement or substitution of, or otherwise avoid, alter or limit the agreement without prior consent from the operator. Further, the Government is restricted from increasing the financial burdens of the operator by applying new petroleum fiscal obligations.

The PSA makes no provision for the Government to be paid a signing bonus.

CGX Resources Inc., a Canadian oil and gas exploration company, currently holds three licenses in the Guyana-Suriname Basin; Corentyne and Demerara in the offshore basin, and Berbice in the coastal, onshore area under its subsidiary On Energy Inc. In 1998, the Guyana Government awarded a Petroleum Licence to CGX in the offshore Guyana Basin. CGX had in June 2000 commenced drilling operations when Surinamese naval gunboats forced the jack-up rig off the Eagle-1 well.

Following Guyana’s approach to the International Tribunal on the Law of the Sea (ITLOS) to resolve the maritime border dispute with Suriname, the South American country was in 2007 awarded at least 93% of the disputed area.

Guyana’s first commercial oil discovery occurred in 2015, about three years after this CGX agreement was signed. The Liza world class discovery was the first of seven made by US oil major ExxonMobil off the South American country’s coast.

Terms outlined in the ExxonMobil PSA point to a 2 percent royalty payable by the company on gross production with a 50/50 profit share. ExxonMobil, under amended terms made in 2016 to the 1999 PSA also paid over an US$18M signing bonus to the Guyana government.