OilNOWLatest News and Information from the Oil and Gas sector in Guyana
More
FeaturedNewsRegional
Updated: April 28, 2022 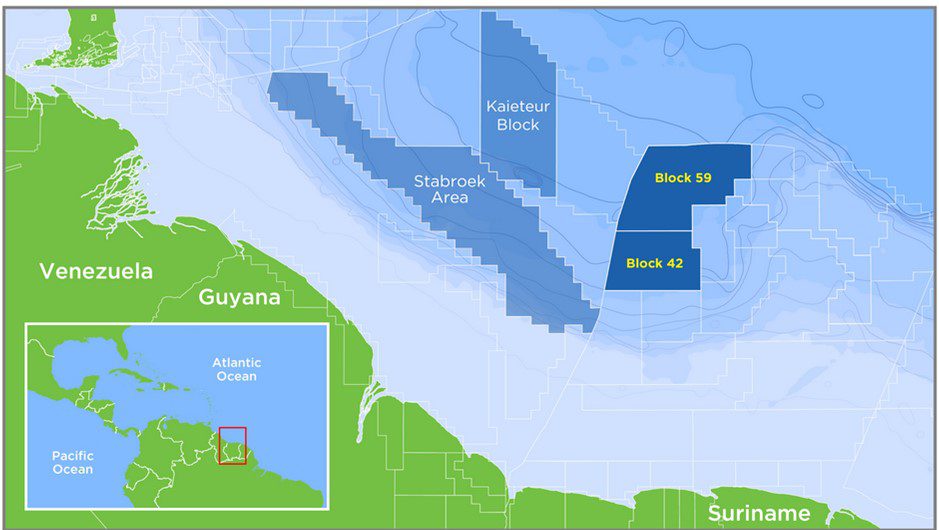 Much focus is being placed on Guyana’s oil and gas successes since the year began, but Hess Corporation is not taking its eyes off Suriname’s potential.

In fact, during the company’s Q1 earnings call on Wednesday, Chief Operating Officer (COO) Greg Hill announced that planning is underway on Suriname’s Block 42 for drilling of the Zanderi-1 prospect.

Hill explained that this should occur around midyear 2022, with the well targeting both Campanian and Santonian-aged reservoirs.

“We see the acreage as a potential play extension from the Stabroek Block with similar play types and trap styles,” Hill told investors.

Block 42 ranges in water depth between approximately 2,000 and 2,500 meters and covers an area of over 6,000 square kilometres gross.

Back in 2018, Kosmos had drilled the Pontoenoe-1 well in Block 42 but did not discover commercial hydrocarbons. According to the company, Pontoenoe-1 was intended to test late Cretaceous reservoirs in a stratigraphic trap charged from oil mature Albian and Cenomanian-Turonian source kitchens.

The well was located offshore Suriname, approximately 280 kms northwest of Paramaribo in approximately 2,497 meters of water and was drilled to a total depth of approx. 6,194 meters. And though a high-quality reservoir was encountered, the well proved to be water-bearing.

But this did not deter Hess; it still believes that Block 42 has great hydrocarbon potential.