OilNOWLatest News and Information from the Oil and Gas sector in Guyana
More
ExplorationFeaturedNews
Updated: April 25, 2020 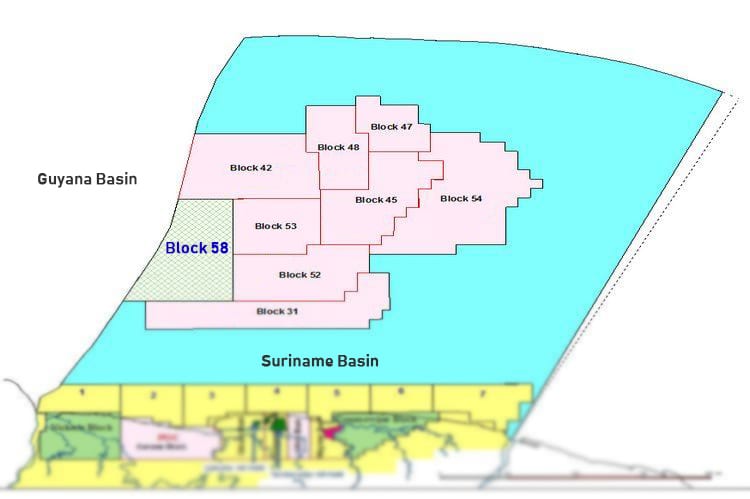 Apache Corporation has identified over 50 prospects on Block 58 offshore Suriname where it has made the first deepwater discovery in the South American country in an area that runs parallel to ExxonMobil’s prolific Stabroek Block offshore Guyana.

The Maka Central-1 well successfully tested for the presence of hydrocarbons in multiple stacked targets in the upper Cretaceous-aged Campanian and Santonian intervals and encountered both oil and gas condensate.

“There’s a lot to get excited about,” says Tom Ellacott, Senior Vice President at WoodMac, speaking on a recent podcast. “Apache has identified over 50 prospects on this one block alone. There are two additional wells coming up and so we’ll obviously be watching those very closely and also Total farmed into the acreage at the end of last year.”

French oil company Total (TOTF.PA) said in December that it would pay a bonus of $100 million as part of its previously announced deal with U.S. peer Apache (APA.N) to develop Block 58. Under the terms of the agreement, Apache and Total each hold a 50% working interest in Block 58, which comprises approximately 1.4 million acres in water depths ranging from less than 100 m to more than 2,100 m. Apache will operate the first three exploration wells in the block, including the Maka Central-1 well, and subsequently transfer operatorship to Total.

WoodMac has said that based on its estimate the Maka Central-1  discovery could contain hundreds of millions of barrels of oil and over a trillion cubic feet of gas, making it a significant find that could place Suriname next in line for an oil boom.