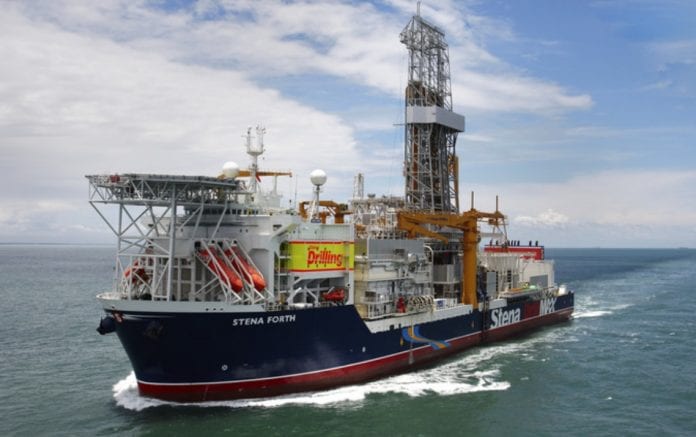 Eco (Atlantic) Oil & Gas Ltd. said on Monday the Stena Forth drillship has been mobilized and is now en route to Guyana from West Africa where it has been operating for Tullow Oil. The drillship is expected to reach Eco’s Orinduik Block on or around 24 June 2019 and spud the Jethro Lobe prospect offshore Guyana on or around 26 June 2019.

A further announcement will be released confirming the spud date of the first well, the company said.

The Stena Forth was actively drilling for Tullow on an existing contract immediately prior to its transition to Guyana and is fully crewed with experienced personnel. This will allow a smooth transition and less rig-up and training time.

The Stena Forth is being mobilized for Eco and its partners, Tullow Guyana B.V. and Total EP Guyana BV, for a committed two well campaign. The first exploration well is to be drilled on the Jethro Lobe prospect, as announced on December 5, 2018. The second well is the Joe prospect, a few kilometres away. The two wells are not contingent and will be drilled immediately one after the other.

Eco said following the company’s placing and subscription completed on 10 April 2019, it has a cash balance today of approximately US$35 million and is funded for its share of up to a further six potential new exploration or development wells in addition to the Jethro Lobe and Joe wells.

Colin Kinley, Chief Operating Officer, said, “The Mobilization of the Stena Forth is the final stage of a long, conservative and quality-controlled process to plan and drill the initial two wells on Orinduik. The Block licence was applied for in March 2014 and was awarded to Eco and Tullow in January 2016 with a first well commitment for 2021/2022.”

He pointed out that with 13 discoveries totalling over 5.5bboe on Exxon’s adjacent Stabroek Block in the past three years, and with Eco’s strong commitment to Guyana, “the Joint Venture partners have since expedited and significantly expanded their work programme far beyond and ahead of the committed requirements.”

“Our team, together with Tullow and Total, have comprehensively interpreted the nearly 3,000 km2 of 3D seismic data we shot over and beyond Orinduik and have selected the first two targets that we feel will allow us to accelerate the Block’s development. With the Stena Forth now mobilizing westwards to Guyana waters, we are on course to drill a pair of potentially transformational wells for the Company, for the Block partners, and for Guyana,” he said.

Kinley said the partners understand this play well and are confident in their interpretation as supported by a relatively high Chance of Success, estimated at over 40% for both the Jethro and Joe prospect. “Whatever the outcome of the two planned wells, we have enough capital for a multi well drilling campaign. We know that there are hydrocarbons on the Block, and good quality sands like those on Stabroek, therefore the main risks are the quality of the seal and the presence of a trap.”

He said thanks to Eco’s successful US$17 million placement and subscription in April, the company has a cash balance today of over US$35 million “so we are in the fortunate position of being fully funded to drill up to six additional wells on Orinduik, across the fifteen identified prospects.”

“The two wells will test both the Upper and Lower Tertiary aged turbidites, while Jethro will also be drilled down to the Cretaceous section,” he said, adding, “Our focus is on near-term oil production and we have ordered our exploration programme around risking, development and deliverability of oil for the people of Guyana and our stakeholders.”