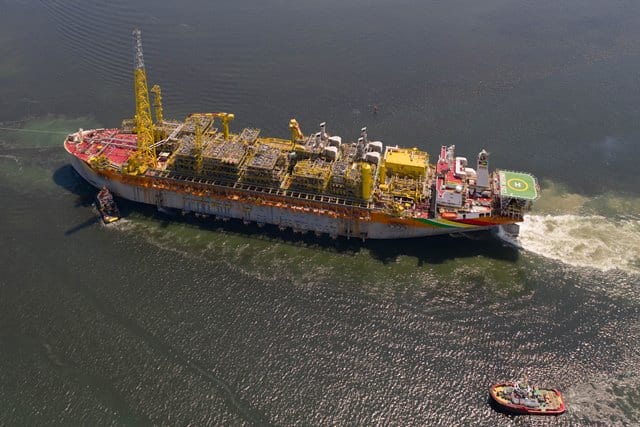 Newly elected President of Guyana, Dr. Irfaan Ali, says he will be looking to ensure that robust systems are...
Read more

Guyanese breathed a sigh of relief on Sunday when it became apparent that a five-month long ordeal that saw...
Read more

Guyana’s positive economic outlook even in face of the coronavirus pandemic is based on the development of several billion...
Read more
OilNOW
OilNow is an online-based Information and Resource Centre which serves to complement the work of all stakeholders in the oil and gas sector in Guyana.

The colossal discoveries ExxonMobil has made in Guyana to date will help expand production and revenue generation through a number of projects analysts say will be the most profitable on the planet.

“The colossal discoveries Exxon has made in Guyana will help expand production and proven reserves. What we know so far is that the fields are world-class and many outside consultants feel that these are going to be some of the most profitable deep-water projects on the planet,” says Peter Millard, Latin America Senior Energy Correspondent at Bloomberg.

Millard said Guyana’s challenge as it becomes the region’s newest oil exporter is to avoid what is often described as the resource curse, or the paradox of plenty. “All too often, a resource-rich country will be more authoritarian and less politically and economically stable than countries without these resources. And so, the challenge for Guyana going forward is to implement transparency in public policy to make sure that the money coming in is well spent and brings returns to the population.”

Government revenue from the Liza Phase 1 development is projected at US$7 billion (GY$1.4 trillion) over the project’s lifetime while all the discoveries combined to date at Stabroek Block is projected to generate around US$117.5 billion (GY$24 trillion) for the country.

Millard said Exxon is considered one of the most efficient international oil companies out there and is capable of moving very fast from discovery to commercial production, even in a country like Guyana that doesn’t have the infrastructure in place or a domestic oil services industry.

Along with oil wealth, particularly in a country without well-established and functional institutions, challenges will be many.

“To begin with the different political factions in Guyana right now have a whole lot more to fight over than they did just a few years ago. We can see this playing out in the country’s elections. There was a Vote of No Confidence against the president last December. They were supposed to set new elections within three months and they still don’t have a date yet. So, the political class is going to have to manage this new resource wealth efficiently and, in a way that benefits the population to the highest degree,” the Bloomberg Correspondent stated.

However, the good news is that Guyana has a small population. “So, in countries like Venezuela or Nigeria that have larger populations, there’s not enough oil revenue to go around. And so, you’ll have high expectations from the population that everyone should be rich, but the revenue really isn’t enough to do a whole lot,” he pointed out.

Millard said countries with small populations like Norway are good examples of well-run oil states. “In Latin America, you have Chile; which is a copper exporter and they have a stabilization fund in place that they can lean on when copper prices decline and so that doesn’t have an impact on the budget and the fiscal situation of the country. And that’s what Guyana is going to need to do. They are going to have to set aside some of their revenue, so they don’t have to contract spending during periods of low oil prices.”

Since 2015, a total of 14 discoveries have been made to date offshore Guyana, 13 of which were made by Exxon in the prolific Stabroek Block, while Tullow Oil recently made its first discovery at Orinduik.

Newly elected President of Guyana, Dr. Irfaan Ali, says he will be looking to ensure that robust systems are in place for the management...
Read more
News

Guyanese breathed a sigh of relief on Sunday when it became apparent that a five-month long ordeal that saw no end to the March...
Read more
News

(Reuters) – BP cut its dividend for the first time in a decade after a record $6.7 billion second quarter loss when the coronavirus...
Read more

Newly elected President of Guyana, Dr. Irfaan Ali, says he will be looking to ensure that robust systems are in place for the management...
Read more

Guyanese breathed a sigh of relief on Sunday when it became apparent that a five-month long ordeal that saw no end to the March...
Read more