OilNOWLatest News and Information from the Oil and Gas sector in Guyana
More
FeaturedNews
Updated: July 6, 2021 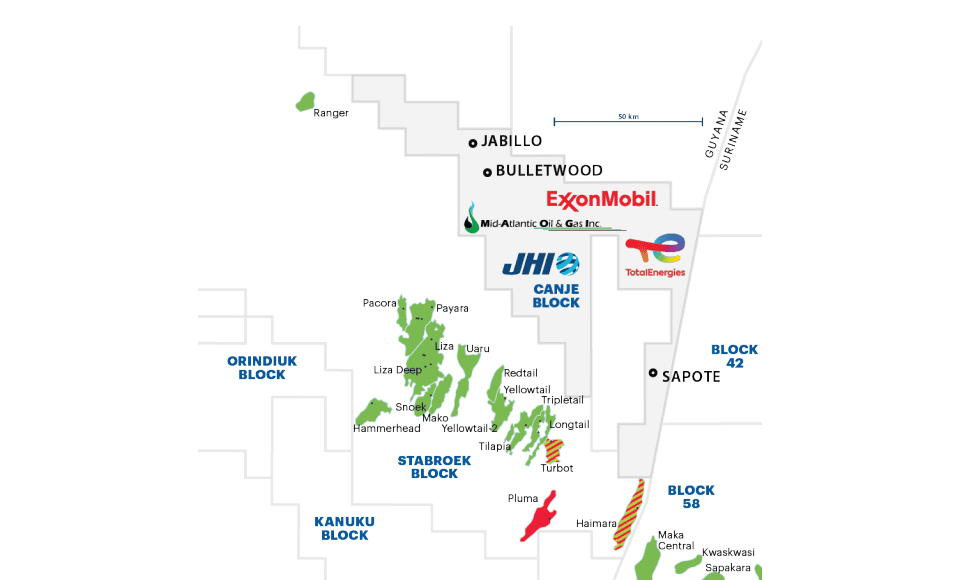 U.S. oil major ExxonMobil hit pay on the very first well it drilled on the 6.6 million acres Stabroek block in 2015 and has maintained a success rate of around 80 percent ever since. But all efforts to find crude in commercial quantities outside of the Stabroek block have so far failed. Why?

Drilling a well thousands of meters below the surface guided by data analysis is never a guarantee that large volumes of hydrocarbons will be found. Exploration remains a highly risky and expensive business where tens of millions of dollars can be lost searching for the right reservoir. Stabroek block’s immense success has been described by many experts in the industry as an anomaly, starting with Exxon hitting pay on the first attempt.

“Exploration in deepwater and ultra-deepwater is a high-risk high-cost venture,” Kevin Ramnarine, former Trinidad and Tobago Minister of Energy told OilNOW following Exxon’s first disappointment outside of the Stabroek block, at the Tanager prospect. “A sub commercial well like Tanager-1 is par for the course in exploration. That is the nature of the oil business.”

Tanager reached a total depth of 7,633 metres. The results confirmed the continuance of a Cretaceous petroleum system and the Liza play fairway onto the Kaieteur Block, down dip from Stabroek, but failed to deliver commercial crude.

Next up was the very promising Bulletwood-1 prospect on the Canje block which analysts described as a ‘Liza look alike’ with reference to the prolific Liza reservoir holding 800 million to 1.4 billion barrels of oil equivalent on the Stabroek block. But Bulletwood also failed to deliver commercial oil. The well was safely drilled in 2,846 meters of water by the Stena Carron drillship to its planned target depth of 6,690 meters.

Commenting at the time, ExxonMobil Senior Vice President of Upstream, Neil Chapman, said the company had begun testing the extension of the known plays in the Guyana-Suriname basin, while searching for new plays outside of the Southeast portion of the Stabroek Block. This included drill campaigns at both the Kaieteur and Canje blocks where the Tanager and Bulletwood prospects were tested.

“All of these wells confirm the presence of hydrocarbons and high-quality reservoirs, and we are actively integrating the data to guide our future programme,” he said.

The most recent disappointment came this week with the announcement on Monday of the Jabillo-1 well results at the Canje block. The well was drilled down to 6,475 meters in 2,903 meters of water by the Stena Carron. It will now be plugged and abandoned after failing to encounter commercial oil.

“While today’s update…is disappointing, this is the nature of oil exploration,” said Gil Holzman, Co-Founder and Chief Executive Officer of Eco Atlantic which recently acquired a 6.4% interest in JHI Associates, a stakeholder in the Canje block with 17.5% interest.

The next, and likely final test for the Canje block this year, will be Sapote-1 located in the southeastern section of the acreage. This prospect lies approximately 100 km southeast of Jabillo and approximately 50 km north of the Haimara discovery in the Stabroek block which encountered ~207 feet (63 meters) of high-quality, gas-condensate bearing sandstone reservoir and approximately 60 km northwest of the Maka Central discovery in Block 58 which encountered ~164 feet (50 meters) of high-quality, oil-bearing sandstone reservoir.

Oil companies drill where data is most promising, but Liza and Tanager show results could vary

“The targets in the region have proven to hold some hundreds of millions of barrels of oil and oil equivalent and we look forward to similar scaled results from this upcoming well,” Holzman said.

Sapote-1 is expected to be spud in mid-August with an estimated drilling time of up to 60 days. All eyes will be on this prospect as operator ExxonMobil once again aims to repeat its unprecedented success at Stabroek block.