OilNOWLatest News and Information from the Oil and Gas sector in Guyana
More
News
Updated: September 11, 2017

Norway goes to the polls in ‘election thriller’ 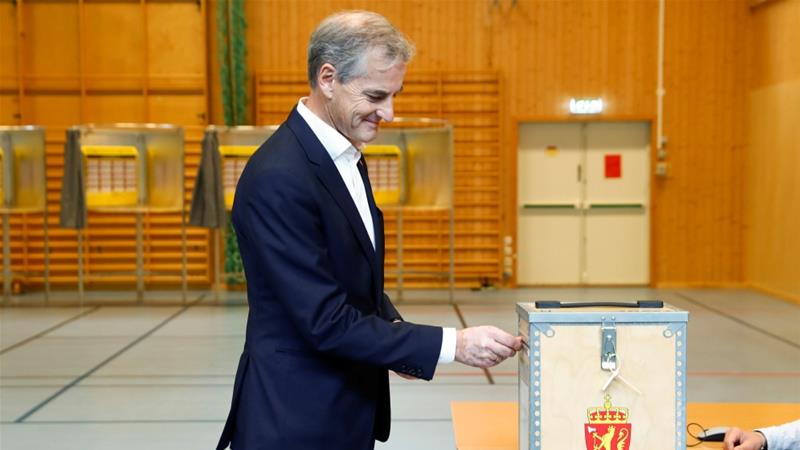 (Aljazeera) Polling stations opened across Norway on Monday as the oil-rich nation votes for its next four years of government.

The election, which has been labelled the “biggest election thriller in many decades” by national media, will see Prime Minister Erna Solberg’s Conservatives go head-to-head with the opposition Labour party.

Opinion polls indicate a close race, with an aggregate suggesting just one seat may separate the parties once Norway’s 169-member parliament is returned.

Solberg’s Conservative party has led a coalition government, alongside the libertarian Progress Party, since ballots were last cast in 2013.

The coalition is running on a manifesto of continuity, which includes further tax cuts in a bid to boost economic growth for Norway’s 5.3 million people.

However, the Labour party, under the leadership of millionaire Jonas Gahr Store, has pledged to raise taxes on Norway’s highest earners in order to strengthen social security provisions and reduce inequality.

“We need a change now because we are growing apart from each other,” said Store, 57, on Sunday.

The Scandinavian nation uses a proportional representation electoral system, which allocates the number of seats a party wins in each parliament relative to the number of votes the party receives in each election.

The winner is likely to face complex coalition negotiations as a number of Norway’s smaller parties prepare to make tough demands in return for their support in the next parliament.

Norway’s Green Party is seeking to end all oil exploration, claiming the practice is environmentally damaging, while other minority parties are also aiming to limit the amount of new oil exploration areas.

More than one million of Norway’s 3.76m registered voters have cast their ballot early, with a number of regions permitting voting on Sunday prior to polling stations opening throughout the country today.

Voting opens at 9am local time (07:00 GMT) and will close at 9pm (19:00 GMT), the first partial results are expected to be released shortly after.