OilNOWLatest News and Information from the Oil and Gas sector in Guyana
More
NewsRegional
Updated: August 6, 2017

As Venezuela spirals US oil confronts a $10b threat 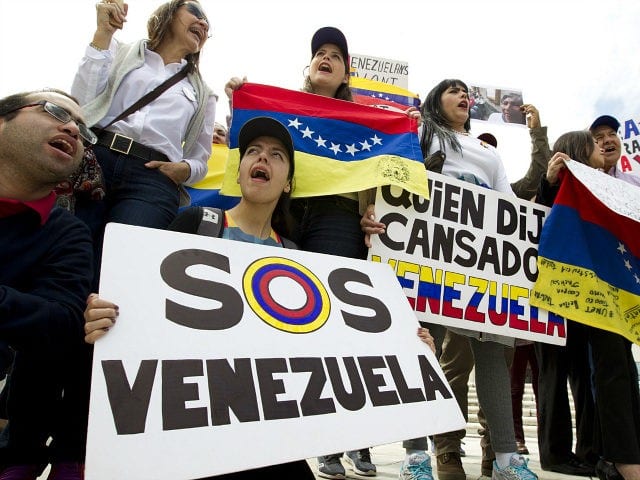 From New Jersey down to Texas, oil companies have come to depend on crude-soaked Venezuela to feed their massive refineries

Gulf News reports that its arrival on July 23, as Venezuela’s democracy slid into what may be its final crisis, underscores the uneasy partnership that the American oil industry has entered with a nation some fear is marching toward dictatorship.

From New Jersey down to Texas, oil companies have come to depend on crude-soaked Venezuela to feed their massive refineries. Last year alone, more than 270 million barrels worth about $10 billion (Dh36.7 billion) reached American shores — enough to produce about 5 billion gallons of gasoline.

Now that vital flow could be staunched if, as industry leaders fear, President Donald Trump’s administration embargoes imports to pressure his Venezuelan counterpart, Nicolas Maduro. The socialist autocrat’s allies on Thursday will begin rewriting the constitution, pushing aside Venezuela’s democratic institutions. The prospect of a US response that cuts off crude has been particularly unsettling for the likes of Chevron, Phillips 66 and Valero Energy Corp which have spent billions calibrating their plants to handle Venezuela’s sludgy-but-abundant oil.

“The reason why Trump has not hit back immediately is because there are lots of constituencies,” foremost among them US refiners and anyone who drives, said Sandy Fielden, commodities research director at Morningstar Inc. in Chicago. “A lot of different parties will be impacted.”

The US on Monday froze any American assets owned by Maduro, a largely symbolic move. White House officials have prepared a menu of possible additional sanctions, but are divided over whether to restrict crude sales, according to a person familiar with the planning. The person asked not to be identified discussing internal deliberations.

An embargo on oil from Venezuela, the third biggest supplier to the US, could force a slowdown in production at Gulf Coast refineries and at least a temporary spike in gasoline prices. That could be sensitive for Trump, who repeatedly attacked Barack Obama over prices at the pump. “Gas prices are at crazy levels-fire Obama!” he tweeted in 2012.

Refiners could turn to suppliers of heavy crude from Canada to Mexico to Iraq, but the move would ripple across global markets as other customers are shunted aside. It’s unclear how quickly alternate sources like Canada’s oil sands, most of which already go to the US, or Mexico, which is battling supply disruptions of its own, could fill the gap.

US refineries process a third of all Venezuelan oil. Washington is weighing the “uncertain odds” that a crude ban could unseat Maduro against “significant prospects of higher feedstock costs and narrower margins for Gulf of Mexico refiners,” Kevin Book, managing director at researcher Clearview Energy Partners LLC, said in a note to clients this week.

Venezuela Information Minister Ernesto Villegas said in an interview in Caracas on Wednesday that punishment will merely strengthen a president who already makes a bogeyman of the US.

“If we get oil sanctions, they are doing us a favour,” Villegas said. “Fuel will be more expensive in the United States and Europe, and Nicolas Maduro will continue in Miraflores,” he said, referring to the presidential palace.

Just how much a ban would elevate prices depends on how quickly refiners could find replacements but the impact is likely to be short-lived, said John Auers of Turner Mason & Co., a Dallas-based energy consultancy. Still, refiners would feel the pinch. Auers estimated the industry has spent more than $50 billion in the past several decades preparing plants for high-density, high-sulphur crude from Venezuela and elsewhere.

Chevron, Valero and other companies have lobbied the Trump administration for caution. The American Fuel & Petrochemical Manufacturers, a trade group, argued in a July 6 letter that sanctions could have “a significant negative effect on US refiners, consumers and our nation’s economy.”

While companies have been trimming Venezuelan imports for months, the nation is still a key supplier for some of America’s biggest refineries. Last month, the country accounted for a more than a quarter of capacity at Valero’s Port Arthur complex in Texas, according to US. Customs data compiled by Bloomberg. It was 43 per cent at Chevron’s facility in Pascagoula, the Gulf Coast town where the Isle of Man-flagged Paramount Helsinki unloaded.

With so much at stake, a full embargo is probably near the bottom of the Trump administration’s battle plan, said Clearview’s Book. The White House is more likely to start with restrictions on the 100,000 barrels a day of lighter oil and other petroleum products that Venezuela receives from the US to bolster its own dysfunctional refineries, he wrote.

If the US later decides to block Venezuelan imports, it could seek to blunt price impacts by releasing oil from an emergency stockpile, the Strategic Petroleum Reserve. Those supplies wouldn’t be a perfect match for refineries running heavy crude from Venezuela, however.

The idea would be a “short-term solution,” said Joe McMonigle, a senior energy policy analyst at HedgeEye Research and former chief of staff at the US. Energy Department. “But I think the White House realises the big potential impact here, so they’re trying to come up with potential remedies.”