OilNOWLatest News and Information from the Oil and Gas sector in Guyana
More
ExplorationFeaturedNewsUncategorized
Updated: September 7, 2021 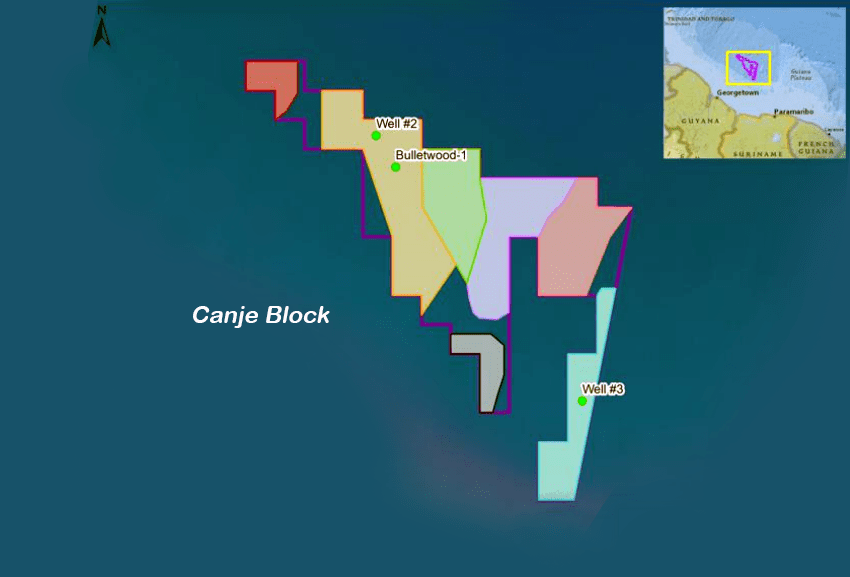 ExxonMobil affiliate Esso Exploration and Production Guyana Ltd. (EEPGL) has submitted a Project Summary to the Environmental Protection Agency (EPA) in Guyana for its 12-well exploration and appraisal campaign on the 26,806 km2 Canje Block. Pending approval, drilling operations are expected to begin next year and will continue through 2025.

“The Project is planned to begin by 1Q 2022,” the company said in the Project Summary. “If a discovery is made, a well test may be performed. Conclusion of the proposed drilling project is expected by 1Q2025.”

“As is customary, an Intent to Drill (ITD) will be prepared and presented to the Ministry of Natural Resources, Guyana Geology and Mines Commission and the EPA approximately one month prior to spud with a further detailed Well Specific Drilling Program (WSDP) to follow,” Exxon said in the Project Summary.

The company conducted a 3D Seismic Survey of the Canje Block in 2016 and a subsequent Environmental Baseline Survey (EBS) was conducted in 2018. The interpretation of the data acquired from this survey continues to be performed. Based this work through 2019, seven perspective prospect areas were identified in which multiple wells are being targeted. These include the first three prospects – Bulletwood, Jabillo and Sapote. Bulletwood and Jabillo were non-commercial discoveries, and a drill campaign is currently underway at Sapote. The 12-well exploration and appraisal campaign will add to these prospects.

Exxon said the same processes it has safely and successfully used for the exploration wells authorized and drilled to date, including mobilization, drilling, ancillary processes (possibly including sidetracks, well tests, and/or vertical seismic profiles), and demobilization, will also be followed for the Canje Block Project. The U.S. oil major is the operator of the adjacent Stabroek Block where it has made 22 discoveries since 2015 and is currently conducting an aggressive 12 to 15 well exploration and appraisal campaign.

The company currently has six drill ships operating offshore, the Stena Carron, the Stena DrillMAX, the Noble Bob Douglas, the Noble Tom Madden, the Noble Don Taylor and the Noble Sam Croft. According to the Canje Block Project Summary, the wells could be drilled by any one of these drill ships which are fully equipped for such drilling operations.

Canje Block: writing the next chapter of Guyana’s exploration success

In terms of aviation assets, Exxon’s existing fleet of six helicopters will continue to be utilized to support the six drill ships as well as on-going Liza Phase 2 Offshore Subsea Umbilical Riser and Flowline (SURF) installation operations. Additional crews are also being added in order to have the ability to fly simultaneous crew change flights.

The Project Summary also outlined the hazardous and non-hazardous wastes that are expected to be generated by the 12-well campaign. Estimates of the quantities for major categories of wastes that would be generated were provided. These are based on the class of drill ships that would be used; anticipated number of support vessels and typical crew sizes normally used for deep water well drilling of this type. It also took into consideration the planned duration of the drilling campaign and experience gained on previous exploration wells drilled in the Canje Block.

Exxon said with the preparation and completion of the Liza Phase 1, Liza Phase 2 and Payara EIAs and the supporting Environmental Baseline Surveys and studies that have been conducted since the approval of the current existing multi-well authorization, its overall knowledge and understanding of the Guyana coast habitats and marine environment has increased substantially over the past 6 years.