OilNOWLatest News and Information from the Oil and Gas sector in Guyana
More
FeaturedNews
Updated: September 27, 2022 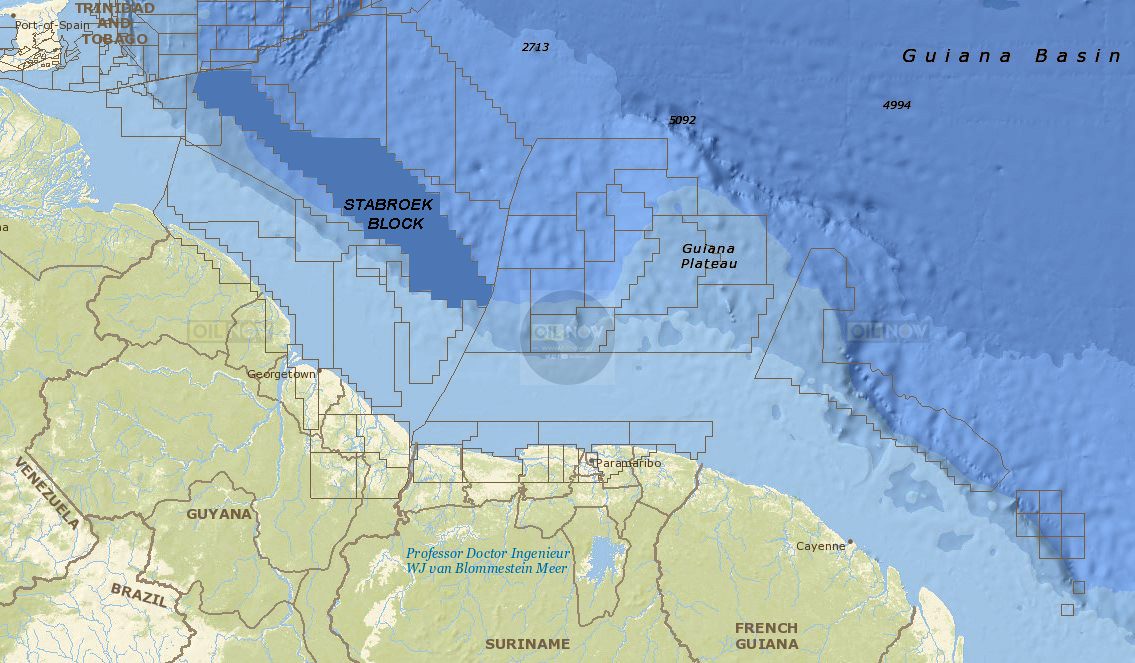 ExxonMobil had been on the hunt for black gold in Guyana’s offshore Stabroek Block since 2008 before it hit pay in 2015 after making its first discovery at Liza 1.

It is now 2022 and the company has made 33 discoveries amounting to approximately 11 billion barrels of oil equivalent resources.

The Liza Phase 1 discovery encountered more than 295 feet (90 meters) of high-quality oil-bearing sandstone reservoirs. It was safely drilled to 17,825 feet (5,433 meters) in 5,719 feet (1,743 meters) of water. Currently, the Liza Destiny floating production storage and offloading (FPSO) vessel is developing approximately 450 million barrels of oil from it.

Here’s a look at the biggest discoveries to date, according to an estimate from Norway’s Rystad Energy.

At the top is Yellowtail – Exxon’s fourth development. The discovery was made in April 2019, the 13th discovery in the Stabroek Block. The Yellowtail- 1 well was drilled in a new reservoir, encountering approximately 292 feet (89 meters) of high-quality oil-bearing sandstone reservoir and was drilled to a depth of 18,445 feet (5,622 meters) in 6,046 feet (1,843 meters) of water. Rystad estimated that the Yellowtail discovery holds 644 million barrels. But it should be noted that it is being developed alongside Exxon’s Longtail discovery, meaning the project will tap into 925 million barrels. The project has already received approval from authorities and is set for start-up in 2023 with the ‘ONE GUYANA’ FPSO.

Coming in second is the Liza Phase 2 discovery. This discovery, called Liza Deep according to Exxon’s Guyana website, was announced in January 2017. An appraisal well, Liza-3, identified an additional high-quality, deeper reservoir directly below the Liza field. According to Rystad Energy, it contains some 591 million barrels. This resource is currently being developed with the Liza Unity FPSO.

Rystad Energy has Exxon’s Liza/Payara contingent resources, around 536 million barrels, among the largest finds in the Stabroek Block. Contingent resources are those quantities of petroleum estimated to be potentially recoverable from known accumulations using established technology or technology under development, but which are not currently considered to be commercially recoverable due to one or more contingencies.

Uaru is the fourth largest of the discoveries listed by Rystad Energy, with 529 million barrels. Uaru will form the basis for ExxonMobil’s fifth project of the same name. Like Yellowtail, it is being developed utilising the subsea tieback mechanism, alongside the Mako and Snoek fields. This is the first time Exxon will tie three fields into a single project offshore Guyana. The Uaru discovery was announced in January 2020, the 16th in the Stabroek Block. Exxon said Uaru-1 well was drilled in a new reservoir, encountering approximately 94 feet (29 meters) of high-quality oil-bearing sandstone reservoir, and was drilled in 6,342 feet (1,933 meters) of water.

Last on the list is the Hammerhead discovery holding an estimated 500 million barrels, according to Rystad Energy. Hammerhead was announced in August 2018, the ninth in the Stabroek Block. The Hammerhead- 1 well was drilled in a new reservoir, encountering approximately 197 feet (60 meters) of high-quality, oil-bearing sandstone reservoir. The well was safely drilled to 13,862 feet (4,225 meters) depth in 3,773 feet (1,150 meters) of water.

Exxon had contemplated Hammerhead for its fourth project, but ultimately went with Yellowtail.