OilNOWLatest News and Information from the Oil and Gas sector in Guyana
More
FeaturedNewsRegional
Updated: July 3, 2022

Norway based Rystad Energy says South America looks set to remain a global exploration hot spot for the next two years, driven primarily by activity in Brazil, Guyana, Suriname and Colombia. The region has seen a recovery in activity this year following the recent slump as the Covid-19 pandemic took hold from early 2020 and sent oil demand and prices tumbling.

Rystad Energy said an increase in the offshore well count in the region is expected to be led by Guyana, followed by Brazil and Colombia, while onshore exploration, which has taken a back seat in the past two years, is on track for a comeback this year and next.

Looking at the period from 2017 to the year to date, Rystad Energy said South America takes top spot among all continents in terms of discovered hydrocarbons.

Guyana now ahead of US, just behind Russia for largest discovered volumes since 2015 – Norway Group

“This is mainly attributed to Guyana, which takes top spot in the region due to the plethora of finds on the prolific ExxonMobil-operated Stabroek Block. The region has seen close to 14.5 billion barrels of discovered resources in the given period, of which Guyana accounts for 65%, followed by Suriname with 15%,” Rystad Energy pointed out.

The Guyana-Suriname Basin continues to be an exploration hot spot in the region having taken center stage since the breakthrough 2015 Liza discovery on Stabroek, which de-risked the basin.

“Since 2021, 86% of all the discovered resources in the region lie in Guyana and Suriname. Some of the major discoveries in the region during the period include the Whiptail, Cataback and Pinktail finds on Stabroek, which together added 1 billion barrels of reserves,” Rystad Energy said.

Other major discoveries in the region in 2021 were Keskesi East, discovered by TotalEnergies off Suriname, and the Urissane discovery made by Petrobras off Brazil.

In less than six months this year, the region has already discovered volumes close to the total unearthed during the whole of 2021. 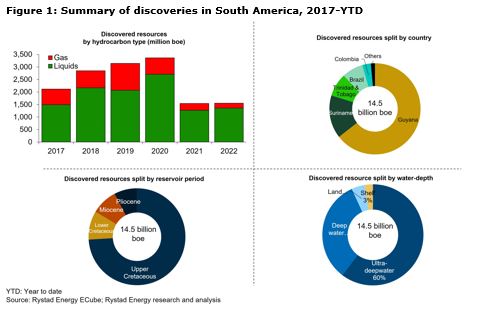 “Major discoveries during the year have again come from Stabroek, which added 1 billion barrels of resources, and from TotalEnergies’ Block 58 across the border in Suriname, adding 250 million barrels,” Rystad Energy said.

Petrobras earlier this year drilled three wells in Brazil’s pre-salt polygon. The state-owned giant announced the presence of hydrocarbons at its Curacao well drilled on its Aram Block in the pre-salt Santos Basin and announced an oil discovery at its Alto de Cabo Frio Central Noroeste well on its Alto de Cabo Frio Central Block in the pre-salt Campos Basin.

Rystad Energy said Petrobras plans to drill appraisal wells at both these finds later in the year.