Guyana is one of the most promising plays to have been opened in the last decade following the discovery of the giant pre-salt reservoir in Brazil, says independent energy research and business intelligence company Rystad Energy.

The new oil producing South American country also accounts for a substantial share of conventional volumes discovered post 2015, the year Liza, the maiden find on the giant Stabroek Block, was announced. The percentage share leapfrogged from between 6% and 7% in 2015-2016 to about 22% in 2018 and 19% in 2019, and now stands at 24% for 2021, inclusive of the Cataback discovery. 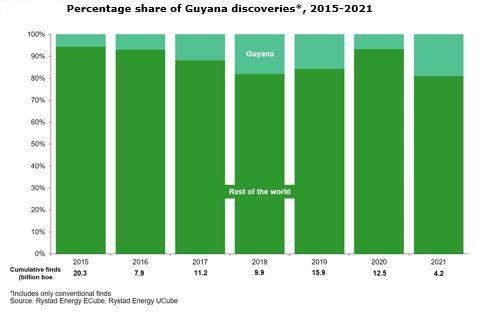 “As we begin the home stretch of 2021 Brazil continues to perplex, and Guyana to impress,” said Schreiner Parker, Senior Vice President and Head of Latin America at Rystad Energy. He was alluding to a mix bag consisting of a divestment programme at Petrobras that is progressing and Brazil’s most recent disappointing bid round.

“One area that doesn’t disappoint much in terms of exploration is the Stabroek block in Guyana, with Exxon totaling it’s 21st discovery earlier in the quarter,” Parker said. “That takes the estimated recoverable resources to above 10 billion boe for Stabroek, an incredible number considering the whole country was barren only a decade ago.”

Cataback was the third discovery this year for the Exxon-led consortium. The well encountered 243 feet (74 meters) of net pay in high quality hydrocarbon bearing sandstone reservoirs.

“With several other exciting prospects and a rigorous drilling program, Stabroek promises to stay in the news over the next several years for all the right reasons,” Parker pointed out.

Following the announcement of the 10th discovery, Pluma, on the block in 2018, ExxonMobil estimated that around 17 identified prospects remained available to be drilled on the block. With 21 discoveries now unearthed on the tract, seven identified prospects remain to be drilled. Although cumulative discovered volumes on the block have now moved to around 10 billion boe, the average volumes associated with discoveries has come down from 500 million boe for the 18 discoveries made until 2020 to 300 million boe for the three new finds this year. Nonetheless, the available prospects along with the potential from appraisals highlights the remaining potential of the block.

“Furthermore, we believe that the identified prospects only take into account prospects mapped within the part of the block that is not disputed with neighbor Venezuela and much remains to be explored in the western area,” the Norway group said.