OilNOWLatest News and Information from the Oil and Gas sector in Guyana
More
FeaturedNews
Updated: December 18, 2018

Pact between Guyana and ExxonMobil ‘more than commercial’ in nature

The decision by US oil major ExxonMobil to conduct a new 3-D seismic survey on the western portion of the Stabroek Block offshore Guyana is a sign of confidence in the country’s internationally-recognised territorial zone. This, a former Minister of Natural Resources in the South American country says, should lead to the early award of some outstanding acreage and the fast-tracking of exploration campaigns for explorers.

Robert Persaud, who served as Minister of Natural Resources and the Environment from 2011 to 2015, believes this recent move by ExxonMobil vindicates the previous administration for the granting of exploration licenses to the oil major for the entire 6.6 million acres Stabroek Block. Persaud’s comments come in wake of an American Security Project article that highlighted the significance of the new ExxonMobil campaign, in light of an ongoing border controversy between Guyana and Venezuela.

“This confirms the wisdom of engaging and the granting of exploration licenses to ExxonMobil by the PPP/C government and later the approval of a Production Sharing Agreement by the APNU-AFC administration,” Persaud told OilNOW on Monday. 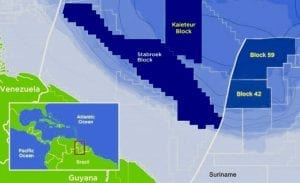 The Stabroek block stretches to the internationally recognized maritime boundaries Guyana has with Venezuela to the west, and Suriname to the east.

Venezuela’s claim to more than two-thirds of Guyana’s territory has escalated over the years, especially with the oil exploration activities and recent world class discoveries offshore Guyana. Venezuelan Leader, Nicolas Maduro, in 2015 issued a decree creating the “Atlantic coast of Venezuela,” which extended that country’s claim to Guyana’s territorial waters in the Atlantic Ocean off the Essequibo region, inclusive of large swathes of the oil-rich Stabroek Block. At Guyana’s urging, the border controversy between the two countries has since been referred to the International Court of Justice (ICJ) by United Nation’s Secretary General, Antonio Guterres.

Persaud said ExxonMobil must be commended for undertaking the new 3-D seismic survey which covers 12,000 square kilometers on the western portion of the block.

“This is an international oil major with the wherewithal and international clout to exercise its legal right to exploration within our internationally-recognised territorial zone. The company must be commended for being ready to take the risk even in light of maneuvers by our western neighbour,” he said.

Exploration was last conducted in this area by Anadarko Petroleum when its vessel – the MV Teknik Perdana – was seized by the Venezuelan Navy in Guyana’s internationally-recognised Exclusive Economic Zone, on October 10, 2013.

“History will record that agreements entered into with ExxonMobil are more than commercial arrangements (whatever their real or perceived shortcomings) but do extend into the arena of strategic national security.  Further, the operator – Anadarko – of offshore Roraima block ought to be encouraged to resume exploration activities after Venezuela’s October 2013 aggression,” Persaud stated.  Other exploration companies, he said, should also be mandated to urgently intensify their exploration campaigns.

“Also, further, this signaled confidence by ExxonMobil should lead to the early award of some outstanding acreage for wider exploration activities in our offshore. We must not allow this momentum and confidence to elude us before other less-risky areas steal away interest and resources by oil exploration companies,” the former minister urged.