OilNOWLatest News and Information from the Oil and Gas sector in Guyana
More
FeaturedNews
Updated: June 14, 2019

15% of global oil discoveries since 2015 made in Guyana 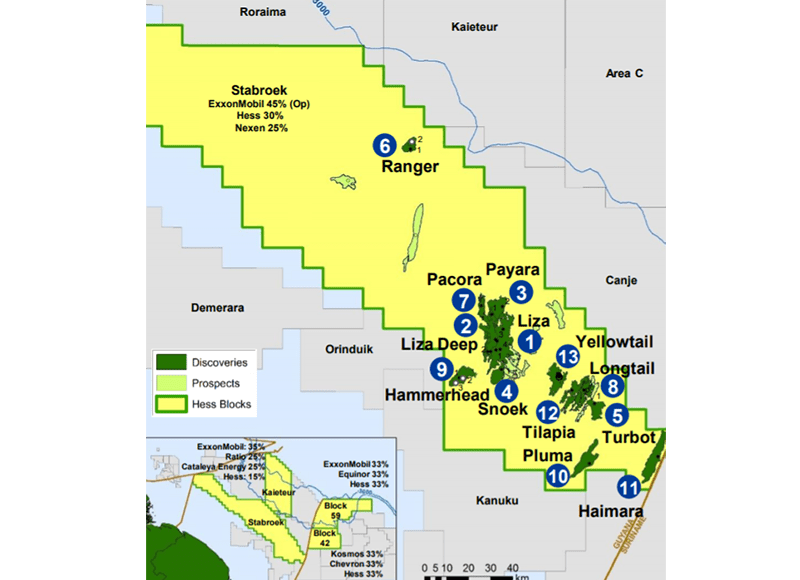 Guyana accounts for 15 percent of conventional oil discoveries made globally since 2015 and from all indications, potential for more crude strikes offshore the South American country remains high.

Since the first giant Liza discovery announced back in May 2015, US oil major ExxonMobil – the operator in the prolific Stabroek Block – has had an unprecedented run of successful discoveries amounting to 13 in total, with just 2 dry holes.

The 6.6 million acres Stabroek Block – which is equivalent to 1,150 Gulf of Mexico blocks – holds multiple oil-rich reservoirs that to date exceed 5.5 billion barrels of oil equivalent and counting.

The mega petroleum reserves will generate untold wealth for the small nation of just 750,000 people, which by 2025, will see a barrel of oil per person being produced every day. Dr. Valerie Marcel, Researcher at Chatham House, says this makes the potential for massive transformation in the country tremendous.

Industry analysts have said this makes the lone English speaking nation on the continent the most oil-rich country per capita on the planet.

Last year, Senior Analyst at Norway-based Rystad Energy, Sonya Boodoo, told over a hundred attendees at a special presentation on Guyana’s revenue share from oil production, that this success places the South American country at number 12 in the world in terms of discovered resource since 2010. “Guyana is doing really well as a newcomer to the industry,” she said, adding that the 80% percent success rate, “…is very high compared to other offshore regions…the rate here in Guyana is quite impressive.”

UK-based energy consultancy group Wood Mackenzie has said Guyana is one of the very few locations in the world where giant oil discoveries were made during the downturn. “Fact is, we need more Guyanas, a lot more, and we need them soon. Without them, the oil market is in danger of tightening in the not too distant future,” the consultancy group stated.

And it’s not just ExxonMobil that is exploring. Tullow Oil will begin drilling its first well at the Orinduik Block, just miles away from Stabroek, within weeks. CGX Energy is also on schedule to drill its Utakwaaka-1 prospect at the Corentyne Block on or before November 2019 while Repsol is looking to begin drilling at its Kanuku block in Q3 2019.